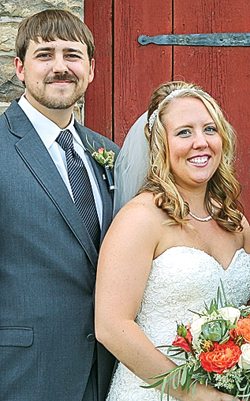 Melissa Pennycoff and Kaleb Reish, both of Williamsport, were united in marriage at 3 p.m. Aug. 27, 2016.

The Rev. Bob Wallace officiated at the ceremony held at Harman & Luthers, Montoursville, where a reception also was held.

The bride is the daughter of Anita and Dave Pennycoff, of William ­sport. She graduated from Loyalsock Township High School in 2009 and received a bachelor’s degree in business administration and economics from Lycoming College in 2013. She is employed as a mortgage processor.

Reish is the son of Karin Swinehart, of Philadelphia, and Nathan Reish, of Lock Haven. He graduated from Loyalsock Township High School in 2010 and received an associate degree in on-site power generation from Pennsylvania College of Technology in 2012. He is employed by IMG Midstream as a maintenance technician.

Maid of honor was Breanna Wheeland.

Flower girl was Ava Shearer, cousin of the bride.

Ring bearer was Aden Shearer, cousin of the bride.

Best man was Kyle Reish, brother of the groom.

Groomsmen were Colt Smith and David Pennycoff, brother of the bride.

Following a trip to Jamaica, the couple resides in Williamsport.