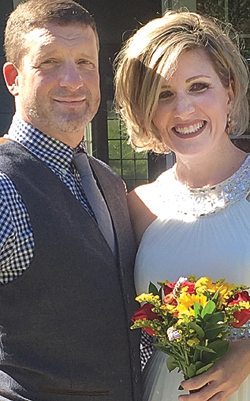 The bride is the daughter of Mary and John Samar, of Montoursville. She graduated from Montoursville Area High School in 1995 and received a bachelor’s degree in administration of justice from Penn State University in 1999. She is employed by Talbots as an assistant manager.

Bower is the son of Roberta and Donald Bower, of Williamsport, and the late James Bower. He graduated from Loyalsock Township High School in 1989 and received a bachelor’s degree in criminal justice administration from Mansfield University in 1994. He is employed by the Lycoming Clinton Joinder Board.

Matron of honor was Beth Hilton.

Following a trip to Seneca Lake, the couple resides in Williamsport.