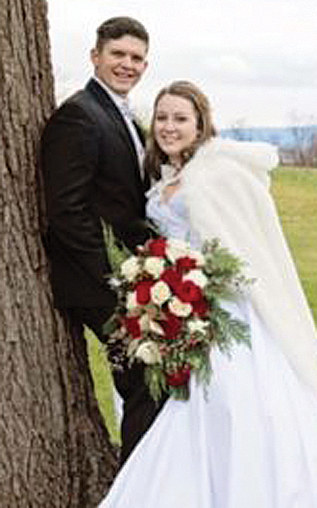 Catherine Kilgus and Ethan Farr, both of Unityville, were united in marriage at 2 p.m. Dec. 3, 2016.

The Rev. Glenn McCreary officiated at the ceremony held at the Church of the Resur­rection, Muncy.

A reception was held at the Farrington Place.

The bride is the daughter of Mary and Gerald Kilgus. She graduated from Hughesville High School in 2011 and received a bachelor’s degree from Penn State University in 2016. She is employed by Durbin Companies, Altoona, as a residence life supervisor.

Farr is the son of Gretchen and Tony Watts, of Unityville. He graduated from Blooms­burg University in 2015. He is employed by Hollidaysburg Waste­water Treatment Facility as an operator.

Lady of honor was Schawnne Kilgus, sister of the bride.

Best man was Zachary Farr, of Unityville, uncle of the groom.

Following a trip to Blue Knob All Seasons Resort, the couple resides in Altoona.