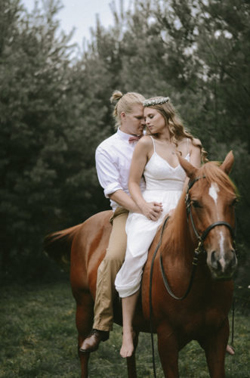 Chelsea Shearer, of Montoursville, and Taylor Hill, of Williamsport, were united in marriage at 5 p.m. Aug. 6, 2016.

Ben Hazen officiated at the ceremony held at The Farm on Beeber Drive, Muncy, where a reception also was held.

The bride is the daughter of Cindy L. Iusi and Steven E. Shearer. She graduated from Mont­oursville Area High School in 2010.

Hill is the son of Teresa and Donald Hill. He graduated from Loyalsock Township High School in 2010.

Maid of honor was Madison Shearer, sister of the bride.

Best man was Nathan Hill, brother of the groom.

The couple resides in Montoursville.