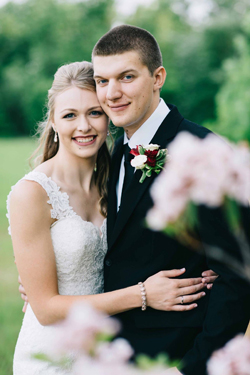 Karissa Joy Dickerson, of Rocky Mount, Virginia, and Ethan Kenneth Wayne Walters, of Lynchburg, Virginia, were united in marriage May 20, 2017.

The Rev. Philip Crandall officiated at the ceremony held at Blue Ridge Gospel Tabernacle, Rocky Mount, where a reception also was held.

The bride is the daughter of Robin Dickerson, of Rocky Mount. She graduated from home schooling in 2012. She received an associate degree from Virginia Western Community College in 2014 and a bachelor’s degree in education from Liberty University, Lynchburg. She is employed by Blue Ridge Christian Academy as a middle and high school teacher.

Walters is the son of Heidi and Kenneth Walters, of Cogan Station. He graduated from Williamsport Area High School in 2013 and is pursuing a bachelor’s degree in cyber and network security at Liberty University, Lynchburg. He is employed by USPS as a rural carrier assistant.

Maid of honor was Alisha Dickerson, sister of the bride.

Bridesmaids were Sarah and Danae Dickerson, both sisters of the bride; Lauren Walters, sister of the groom; Victoria Pinkstock; Megan Lorson; Amber Newton; and Taylor McBride.

Best man was Kenneth Walters, father of the groom.

Following a trip to Florida, the couple resides in Rocky Mount.