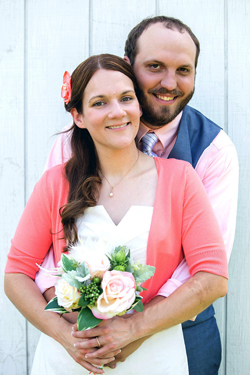 Grace Hockenberry and Jeff Detrick, both of South Williampsort, were united in marriage at 1 p.m. June 25, 2016.

The Rev. Alice Rauch officiated at the ceremony held in Windfield.

A rehearsal dinner was held at Country Cupboard, Lewisburg.

The bride is the daughter of Martha and Bill Hockenberry, of New Berlin. She graduated from Mifflinburg Area High School in 2001 and received a bachelor’s degree in art education from Mansfield Univer­sity in 2005. She is employed by Dr. Forse, optometrist, McElhattan.

Detrick is the son of Deb and Rick Detrick, of Williamsport. He graduated from Williamsport Area High School in 2005 and received a bachelor’s degree in chemical engineering from Bucknell University, Lewisburg, in 2009. He is employed by First Quality, Lock Haven, as a converting process engineer.

Matron of honor was Kathryn Virgilio, of Greensboro, North Carolina, sister of the bride.

Best man was Brett Detricik, of Montoursville, brother of the groom.

The couple resides in South Williamsport.