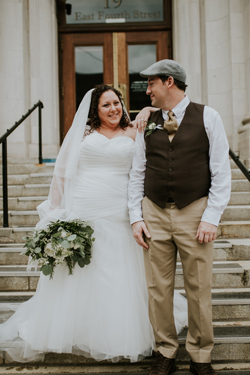 Edward Keirsnowski officiated at the ceremony held at the James V. Brown Library, where a reception also was held.

The bride is the daughter of Lorri and Steve Amrom, of South Williamsport. She graduated from South Williamsport Area High School in 2003 and received a bachelor’s degree in fine art from Lycoming College in 2007. She is employed by River Valley Regional YMCA as the Jersey Shore branch executive director.

Yaple is the son of Jill and Greg Yaple. He graduated from Williamsport Area High School in 1998. He is employed by Marco’s Restaurant as a manager.

Maids of honor were Tamah and Madilynn Amrom, both sisters of the bride.

Groomsmen were Greg Yaple, father of the groom; Darren Pysher; and David Fluck.

Following a trip to Atlantic City, the couple resides in South Williamsport.