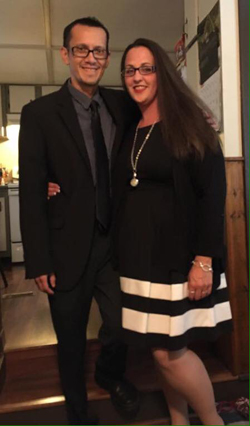 Katie Jo Brelsford and Lawrence William Sengewald, both of Linden, were united in marriage at 6 p.m. June 20, 2017.

Barbara Horn officiated at the ceremony held in Loyalsock Township.

The bride is the daughter of Karen and Robert Brelsford, of Williams­port. She graduated from Loyalsock Township High School in 2001. She is employed by Springs Window Fashions as a customer service representative.

Sengewald is the son of William Sengewald, of Madison, Alabama. He graduated from O’Fallon High School, O’Fallon, Illinois, in 1993. He is employed by Springs Window Fashions as a customer service representative.

Matron of honor was Nicki Collins, of Williams­port, sister of the bride.

Best man was Tyler Sengewald, of Linden, son of the couple.

The couple resides in Linden.