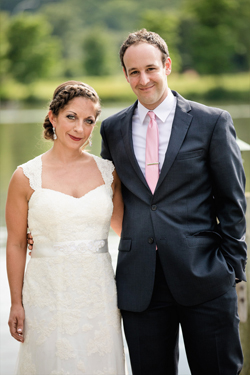 Fiona Conroy and Robert Swanger, both of Washington D.C., were united in marriage on July 2, 2017.

Rabbi Sarah Tasman officiated at the ceremony held at the Ithaca Farmers Market on the Cayuga Inlet, Ithaca, New York.

Swanger is the son of Bob Swanger and the late Debra Treimel Swanger. He graduated from Hershey High School, in 2001 and received a bachelor’s degree from the University of Pittsburgh. He is employed by Revolution Messaging as a digital strategist.

Maids of honor were Meredith Conroy, of Ithaca, sister of the bride, and Valerie Dandar, of Washington, D.C.

Best men were Russell Swanger, brother of the groom, and Brett Biggica, both of Harrisburg.