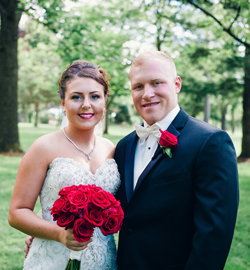 Tonya Nicole Krug and Duncan Tedd Maitland, both of Williamsport, were united in marriage at 4 p.m. May 27, 2017.

Robert Hart officiated at the ceremony held at Brandon Park.

A rehearsal dinner was held at Chef Hosch and Ann Catering Tastings and Events Room.

A reception was held at The Genetti Hotel and Suites.

The bride is the daughter of Rochelle Krug, of Williamsport. She graduated from Williamsport Area High School in 2010, received an associate degree in radiography from Pennsylvania College of Technology in 2014, where she also is pursuing a bachelor’s degree in nursing.

Maitland is the son of Tedd Maitland, of Scottsdale, Arizona, and Sherry and James Hyland, of Jersey Shore. He graduated from Desert Mountain High School, Scottsdale, in 2008 and received an associate degree in nursing from Pennsylvania College of Technology in 2015. He is employed as a registered nurse.

Maid of honor was Ashely Caverly.

Best man was James Hyland, brother of the groom.

Following a trip to Punta Cana, Dominican Republic, the couple resides in Williamsport.