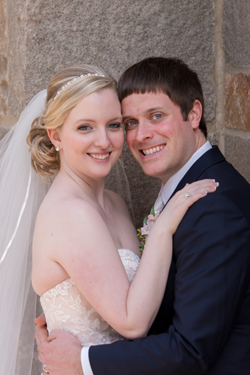 Kathleen Joy Eckhardt, of Mt. Lebanon, and Michael David Shipman, of Williamsport, were united in marriage on May 20, 2017.

A rehearsal dinner was held at DeLallo’s Restaurant, Pittsburgh.

A reception was held at the Hilton Doubletree-Greentree Hotel.

The bride is the daughter of Sue Ann and Frederick Eckhardt, of Mt. Lebanon. She graduated from Mt. Lebanon High School in 2007 and attended the University of Dayton, Ohio. She is employed by the Target Corp., Selinsgrove.

Shipman is the son of Pamela and David Shipman, of Loyalsock Township. He graduated from Loyalsock Township High School in 2007, received a bachelor’s degree in accounting from Ithaca College, New York, in 2011 and a master’s degree from the University of Pittsburgh in 2012. He is employed by Pennsylvania College of Technology as a lecturer in accounting and business administration.

Maid of honor was Jennifer Gallagher, of Johnstown, Ohio, sister of the bride.

Flower girl was Lorien Fisher, niece of the groom.

Ring bearer was Kaden Fisher, nephew of the groom.