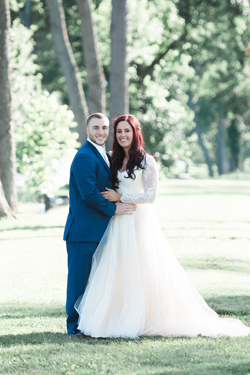 Christina Michelle Eisner and Perry Jonathon Rogers, both of Williamsport, were united in marriage at 4 p.m. June 24, 2017.

The Rev. Joshua Reinsburrow officiated at the ceremony held at Messiah Lutheran Church.

A rehearsal dinner was held in Williamsport.

A reception was held at Bastress Mountain Winery.

The bride is the daughter of Susan and Philip Eisner Jr., of Willia­msport. She graduated from Williamsport Area High School in 2008, received a bachelor’s degree in psychology from Bloomsburg University in 2012 and a master’s degree in clinical mental health counseling from Messiah College in 2015.

Rogers is the son of Tressa and Mark Rogers, of Williamsport. He graduated from Williamsport Area High School in 2010. He is employed by Eureka Resources LLC as a technician.

Matron of honor was Sheena Troxell.