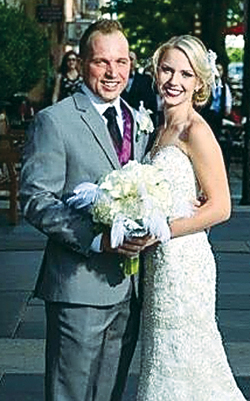 Dr. Matthew Murphy officiated at the ceremony held at the Historic Hotel Bethlehem, Bethlehem, Pa., where a reception also was held.

Reinert is the son of Donna and Thomas Reinert, of Mertztown. He graduated from Bandy­wine Heights High School in 2007 and received a degree in chemical petroleum engineering from the University of Pittsburgh in 2011. He is employed by Brush International, Pittsburgh.

Matron of honor was Lisa Lopez, of Baker, Florida, sister of the bride.

Best man was Jared Reinert, of Worcester, Massachusetts, brother of the groom.

Groomsmen were Colin Hamm, of Kutztown; Paul Deysher, of Fleetwood; Kyle Hackmeister, of Pitts­burgh; and Dr. Matthew Nudy, of Hershey.

Following a trip to Cannes, France, the couple resides in Pittsburgh.