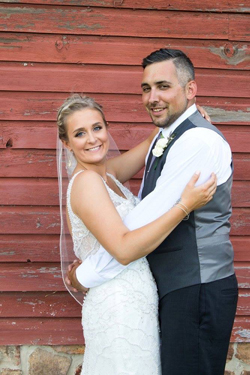 Jeffrey Pennycoff officiated at the ceremony held in Lock Haven, where a rehearsal dinner and reception also were held.

The bride is the daughter of Ronald Steppe, of Williamsport, and the late Victoria Steppe. She graduated from Jersey Shore Area High School in 2009 and a received a bachelor’s degree in nursing from Pennsylvania College of Technology in 2013. She is employed by UPMC Susquehanna as a registered nurse clinical supervisor.

Folmar is the son of Christine and Dave Malone, of Newmans­town, and Dana and Michael Shurer, of Williamsport. He graduated from Conestoga Valley High School, Lancaster, in 2006, and received an associate degree in business management from Pennsylvania College of Technology in 2011. He is employed by JKJ Tool Co. as a machinist.

Maid of honor was Brittney Wensel.

Following a trip to Punta Cana, Dominican Republic, the couple resides in Williamsport.