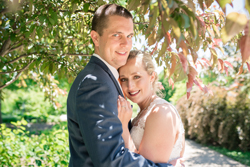 Krystal Ann Bealing, of Hanover, and Patrick Bloom, of Montoursville, were united in marriage at 4:30 p.m. June 3, 2017.

The ceremony was at General Potter Farm, Spring Mills, where a reception also was held.

The bride is the daughter of Judy and Jim Lawrence and Sharon Miller, all of Hanover. She graduated from New Oxford High School, New Oxford, in 2006 and received bachelor’s degrees in soil science and environmental research management from Penn State University in 2010. She is employed by BL Companies, Camp Hill, as an environmental scientist.

Bloom is the son of Eileen and Keith Bloom, of Montoursville. He graduated from Montoursville Area High School in 2007, received a bachelor’s degree in kinesiology from Penn State University, State College, in 2011 and an associate degree in physical therapist assistant from Penn State University, Hazleton, in 2016. He is employed by Gilbert Physical Therapy, Mechanicsburg, as a physical therapist assistant.

Maid of honor was Kate Stoner

Following a trip to Universal Studios, Orlando, Florida, and the Mayan Riviera, Mexico, the couple resides in Mechanicsburg.