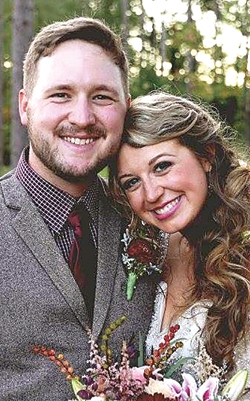 Mark Brumbach officiated at the ceremony held at a family cabin property in Trout Run, where a reception also was held.

The bride is the daughter of Candace and Bruce Crissman, of Williamsport. She graduated from Loyalsock Township High School in 2010 and received a bachelor’s degree in geography from Mansfield University in 2014. She is employed by Jersey Shore State Bank as an imaging representative.

Knopp is the son of Holly and John Knopp, of Trout Run. He graduated from Montoursville Area High School in 2010 and received a bachelor’s degree in geography from Mansfield University in 2014. He is employed by AECOM as a survey technician.

Matron of honor was Miranda Saucedo.

Maid of honor was Lauren Walker.

Bridesmaids were Kirstin Pierce and Kaitlyn Knopp, both sisters of the groom; Lacey Walker; and Hilary Wilson.

Following a trip to New England, the couple resides in Trout Run.