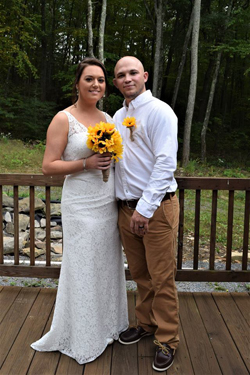 Jennifer Elaine Haldeman and Shane Vogel, both of Williams­port, were united in marriage at 4 p.m. Sept. 16, 2017.

John Mckinney officiated at the ceremony held in Williamsport, where a reception also was held.

The bride is the daughter of Debi Knerr, of Mountain City, Tenn­essee, and Troy Haldeman, of Roaring Branch. She graduated from Huntington High School, Huntington, West Virginia, in 2008 and received an associate degree in medical administrative assistance from Newport Business Institute in 2012.

Vogel is the son of Claudia and Ken Vogel, of Montoursville. He graduated from Williamsport Area High School in 2008.

Maid of honor was Davina Reed, of Huntington.

Bridesmaid was Andreana Siddle, of Williamsport.

Flower girl was Kenley Vogel, daughter of the couple.

Ring bearer was Zander Dincher, son of the couple

Groomsman was Matt Hoschar, of Williamsport.