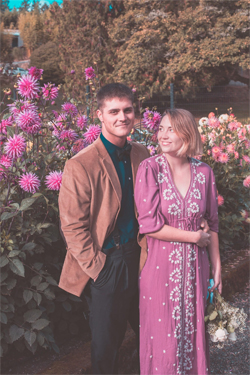 Kelsey Anne Mason, of Denver, Colorado, and Jeffrey Paul Mach, of Tacoma, Washington, were united in marriage at noon Oct. 7, 2017.

Judge Kevin McCann officiated at the ceremony held in Tacoma.

The bride is the daughter of Jacquelyn Casale, of Muncy, and the late Richard Mason. She graduated from Hughesville High School in 2011, received a bachelor’s degree in geological sciences from Kutztown University in 2015 and a master’s degree in geological sciences from the University of Texas, El Paso, Texas, this year. She is employed by the United States Geological Society, Denver, as a geospatial analyst and drone pilot.

Mach is the son of Michele and Paul Mach, of South Williamsport. He graduated from South Williamsport Area High School in 2010 and received an associate degree in forestry from Pennsylvania College of Technology in 2015. He is employed by the Army, Tacoma, as a cavalry scout.

The couple is planning a trip to the Hawaiian Islands, and resides in Tacoma.