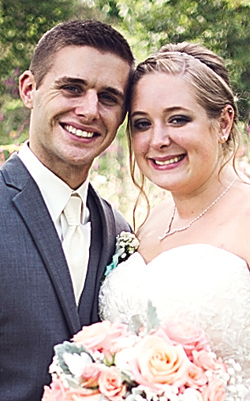 Celina Anne Seyler and Douglas Paul Hasko Jr., both of Williamsport, were united in marriage at 2 p.m. Aug. 12, 2017.

The ceremony was held at St. Luke Lutheran Church.

A rehearsal dinner was held at Bullfrog Brewery.

A reception was held at the Valley Inn, South Williamsport.

The bride is the daughter of Alexandra and Scott Seyler, of Williamsport. She graduated from St. John Neumann Regional Academy in 2012 and received a bachelor’s degree in business management and corporate communications from Lycoming College in 2016. She is employed by UPMC Susquehanna.

Hasko is the son of Betsy and Douglas Hasko, of Williamsport. He graduated from St. John Neumann Regional Academy in 2012 and received a bachelor’s degree in manufacturing engineering technology from Pennsylvania College of Technology in 2016. He is employed by Primus Technologies Corp.

Matron of honor was JoAnne Bastian.

Maid of honor was Tatiana Beard.

Following a trip to Antigua and Barbuda, the couple resides in Williamsport.