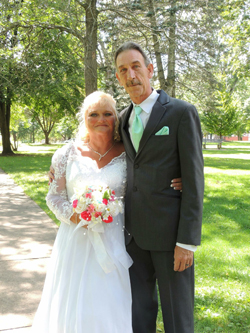 Linda Sue Yarison, of South Williamsport, and Max Eldon Strouse, of Williamsport, were united in marriage at 1 p.m. Aug. 5, 2017.

A rehearsal dinner was held in South William­sport.

A reception was held at Harmonia Gesang Verein.

The bride is the daughter of Joseph R. Girio, of South Williamsport, and the late Doris E. Girio. She attended Loyalsock Township High School and received a degree in business, horticulture and floral design from Pennsylvania College of Technology.

Strouse is the son of Rose M. Strouse, of Williamsport, and the late Max Eldon Strouse. He attended Loyalsock Township High School. He is employed by HRI Inc., State College, and served in the Air Force.

Matron of honor was Jamie Wray, of William­sport

Maid of honor was Ashbyilyin Tanner, of Myerstown.

Bridesmaids were Andrienne Sandra, of Trout Run and Serena Mausteller, of William­sport, daughter-in-law.

Flower girl was Taylor Wray, of Williamsport, granddaughter of the bride.

Following a trip to Cape May, New Jersey, and Rehoboth Beach, Delaware, the couple resides in Williamsport.