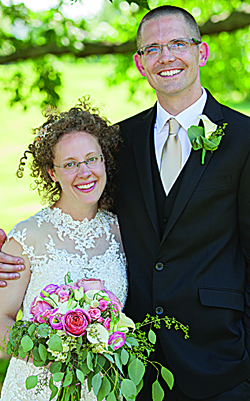 Elizabeth Regan, of Lewisburg, and Steve Herman, of Danville, were united in marriage at 1 p.m. June 11, 2017.

The Rev. Robert W. Regan Sr. officiated at the ceremony held at the Frosty Valley Country Club in Danville.

The bride is the daughter of Nancy and Robert Regan, of Linden. She graduated from Williamsport Area High School in 2003 and received a bachelor’s degree in English with a minor in mass communications (print) from Lock Haven University in 2009. She is employed by SEDA-Council of Governments, Lewisburg, as a communications manager.

Herman is the son of Brenda and Keith Gibson, of Danville, and Peg and Ed Herman, of Danville. He graduated from Danville Area High School in 1998 and received a bachelor’s degree in geography from Bloomsburg University in 2002. He is employed by SEDA-Council of Governments, Lewisburg, as a transportation planner.

Matron of honor was April Fisher, of Cogan Station, sister of the bride.

Best man was Mike Herman, of Riverside, brother of the groom.

Ring bearer was Nehemiah Regan, of St. Thomas, Pennsylvania, nephew of the bride.

Flower girls were Grace and Faith Regan, of St. Thomas, nieces of the bride.

Following a trip to Hawaii, the couple resides in Danville.