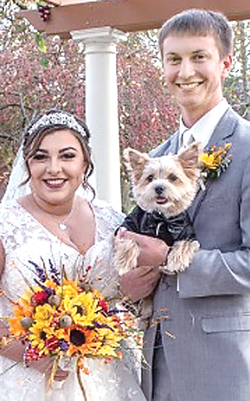 Melaina Evelynn Chapman and Eric James Stopper, both of Williamsport, were united in marriage at 2:30 p.m. Nov. 11, 2017.

The. Rev. Brian Van Fossen officiated at the ceremony held at St. Joseph the Worker Parish. A reception was held at the Watson Inn, Watsontown.

The bride is the daughter of Serena and Tracey Chapman, of Williamsport. She graduated from Williamsport Area High School in 2013 and is pursuing a bachelor’s degree in criminal justice at Lock Haven University. She is employed by UPMC Susquehanna as a customer service representative.

The groom is son of Suzanne and C. Andrew Stopper, of Williamsport. He graduated from Williamsport Area High School in 2013 and received a bachelor’s degree in physics, astronomy and astrophysics from Penn State University. He is employed by Advanced Simulation Technology Inc. (ASTi), Reston, Virginia, as a project engineer.

Maid of honor was Leah Chapman, sister of the bride.

Ring bearers were Maxwell and Cooper Tinney, cousins of the bride.

Best man was Kevin Stopper, brother of the groom.

Groomsmen were Brian Stopper, brother of the groom; Stephen Enderle; and Jeffrey Contri.

Following a cruise to the Bahamas, the couple resides in Reston, Virginia, with their dog, Petey.

Muncy’s Ty Nixon is making up time after ACL tear