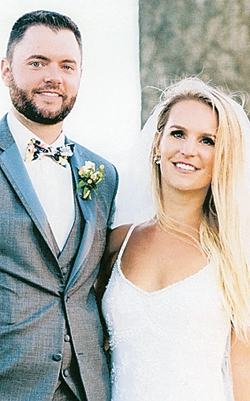 The Rev. Jeffrey Gisriel officiated at the ceremony held at The Links at Lighthouse Sound, Bishopville, Maryland, where a reception also was held.

A rehearsal dinner was held at Macky’s, Ocean City, Maryland.

The groom is the son of Jackie and Dan Shifflet, of Williamsport. He graduated from Williamsport Area High School in 2004. He received a bachelor’s degree from Bloomsburg University in 2008 and a master’s degree from Stevenson University, Owings Mills, Maryland. He is employed by Vaya Pharma as an assistant controller.

Maids of honor were Caitlin Sporik and Sarah Kooistra, both of Baltimore, Maryland; and Amanda Triplett, of Bel Air, Maryland.

Bridesmaids were Stacy Gillen, of Columbia, Maryland; Brigitte Stanley, of Baltimore; and Tessa Shifflet, of Downingtown, sister of the groom.

Groomsmen were Jonathan Milliron, of Enola; Andrew Kehl, of Mt. Wolf; Matt Kiehl, of Williamsport; and Eric Lamdin, brother of the bride.

Following a trip to Playa Mujeres, Mexico, the couple resides in Elkridge.