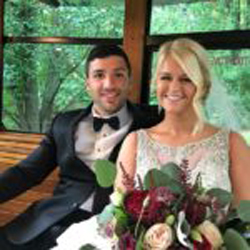 Jeffrey Pennycoff officiated at the ceremony held at the Bush House Estate, Muncy, where a rehearsal dinner and reception were also held.

The bride is the daughter of Courtenay and Howard Rainey, of Jersey Shore. She graduated from Jersey Shore Area High School in 2007. She received a bachelor’s degree in psychology from Lycoming College in 2011 and a master’s degree in counselor education from Penn State in 2013. She is employed by Loyalsock Township School District as a high school counselor.

The groom is the son of Colleen and Forrest Campman, of Clearfield. He graduated from Clearfield High School in 2009. He received a bachelor’s degree in communications from Lycoming College in 2013 and a master’s degree in collegiate athletic administration from California University of PA in 2015. He is employed by Bucknell University as the director of recreation services.

Maid of honor was Allyson Budrow.