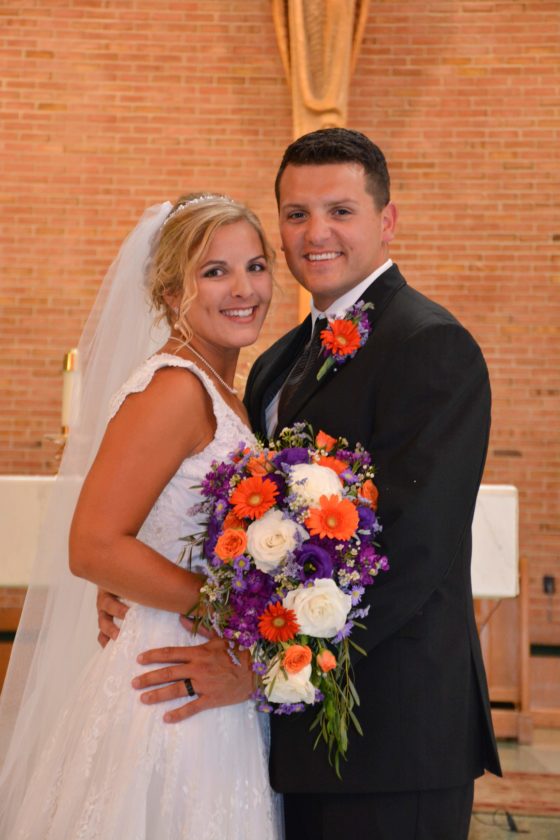 Marissa Lynn Gummo and Tyler Allan Blaise, both of Accomac, Virginia, were united in marriage at 1:30 p.m. August 5, 2017.

The Rev. Michel McCormick and Rusty Wolfinger officiated at the ceremony held at Our Lady of Lourdes Catholic Church, Montoursville.

The bride is the daughter of Sheri and William Ruffing, of Montoursville, and Cassandra and John Gummo, of Watsontown. She graduated from Montoursville Area High School in 2009. She received a bachelor’s degree in elementary education from Susquehanna University in 2013 and a master’s degree in special education from Slippery Rock University in 2016. She is employed by Accomac County School District as a third grade teacher.

The groom is the son of Brenda Blaise and John Miron, of Port Henry, New York. He graduated from Moriah Central High School in 2009. He received a bachelor’s degree in childhood education from SUNY Plattsburgh University in 2013 and a master’s degree in administration and leadership from Grand Canyon University this year. He is employed by Accomac County School District as an eighth grade civic teacher.

Matron of honor was Melissa Badger, of Las Vegas, Nevada, sister of the bride.

Maid of honor was McKenzie Ruffing, of Montoursville, sister of the bride.

Flower girl was Kelsey Baker, of Troy, New York, niece of the groom.

Ring bearers were Aiden and Peyton Badger, of Las Vegas, Nevada, nephews of the bride; and Thomas Baker, of Port Henry, New York, nephew of the groom.

Best man was Tim Baker, of Troy, New York, brother of the groom.