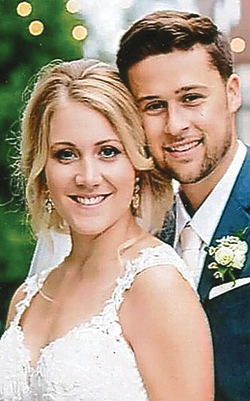 Meghan Marie Logue and Patrick Francis Smith, both of Williamsport, were united in marriage at 2 p.m. Sept. 2, 2017.

The Rev. Joseph Elston officiated at the ceremony held at St. Joseph the Worker Parish.

Logue is the daughter of Sue and Bill Logue, of Williamsport. She graduated from Williamsport Area High School in 2009 and received a doctorate of pharmacy from N.Y. State University at Buffalo in 2016. She is employed as a pharmacist in Philadelphia.

Smith is the son of Sue and Shaun Smith, of Williamsport. He graduated from Williamsport Area High School in 2009 and received a doctorate of physical therapy from N.Y. State University at Buffalo in 2015. He is employed as a physical therapist in Philadelphia.

Maids of honor were Tracey Edwards and Victoria Nachar.

Flower girl was Scarlett Peacock, cousin of the groom.

Ring bearer was Sam Peacock, cousin of the groom.

Best men were Shaun Smith and Mitchell Smith, brothers of the groom.

Following a trip to St. Lucia, the couple resides in Philadelphia.