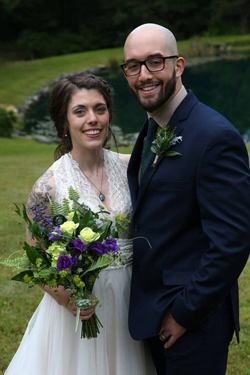 Judge Nancy Butts officiated at the ceremony held at The Wiegand Family Home, Cascade, where a reception also was held.

The bride is the daughter of Brenda and Joseph Wiegand, of Cascade. She graduated from Montoursville Area High School in 2011 and received a bachelor’s degree in marketing from Pennsylvania College of Technology in 2016. She is employed by Venture Outdoors, Pittsburgh, as their communications and media coordinator.

The groom is the son of Nancy Layre, of Hatboro, and Frank Layre, of Spring Hill, Florida. He graduated from Hatboro-Horsham High School in 2011 and received a bachelor’s degree in culinary arts from Pennsylvania College of Technology in 2015. He is employed by Eleven Contemporary Kitchen, Pittsburgh, as a sous chef.

Maid of honor was Marie Taylor, of Vestal, New York.

Bridesmaids were Kacie Weaver, of Harrisburg, and Abbey Reighard, of Trout Run.

Groomsmen were Craig Capista of Nashville, Tennessee and Cody Waltz, of Montoursville.

The couple resides in Pittsburgh.