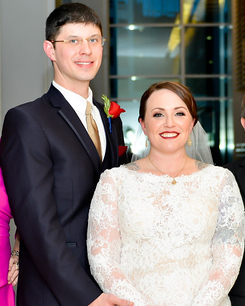 Samantha K. Wallace and Eric M. Ecker, both of Williamsport, were united in marriage on Oct. 27, 2018. The ceremony and reception were held at Fairmont Pittsburgh in Pittsburgh, officiated by Rev. Andrew France.

The bride is the daughter of Kathleen Wallace, of Pittsburgh, and Mark Wallace, of Clearwater, Florida. She graduated from Franklin Regional Senior High School in Murrysville in 2002 and received a bachelor’s degree in English studies from Robert Morris University in 2015. She received a master’s degree in publishing studies from The George Washington University, Washington, D.C., in 2018. She is employed at Larson Design Group as a content specialist and copywriter in the marketing department.

The groom is the son of Claire Currie, of Harrisburg, and Robert A. Ecker, of Williamsport. He graduated from St. John Neumann Regional Academy in 2005 and received a bachelor’s degree in chemistry from the University of Pittsburgh in 2008. He received a doctorate of medical dentistry from the University of Pittsburgh School of Dental Medicine in 2012. He is the owner of Ecker Family Dental.