In the week before Easter, the Notre Dame Cathedral in Paris, France, was nearly destroyed by fire.

The City of Williamsport faced its own church disaster back in 1872. It occurred on one of the holiest days in the Christian calendar.

“We are called upon to record the most unfortunate event that ever transpired within the limits of Lycoming County,” the Lycoming Gazette and West Branch Bulletin, forerunners to the Sun-Gazette, reported. “Last evening the Sabbath School, of the Baptist Church, Newberry, assembled to participate in the ceremonies of Christmas night.”

It was then reported that some “250 men, women and children were there … little dreaming that a terrible catastrophe was about to occur.”

The writer described that J.B.G. Kinsloe, publisher of the Gazette and Bulletin at the time, addressed the crowd before presents were passed out and the “gifts had been brought in … as the merry hearts of the young going out (with a) gladsome laugh and joyous shout.”

However, “at this moment … an electric shock of premonition shot through the assemblage that a catastrophe was about to take place.”

“There was a peculiar shake, a quivering of the timbers, that denoted a sudden downfall, and no sooner had the impression taken a firm hold upon those there congregated, that the terrible catastrophe came,” the article said.

According to the “History of Lycoming County, Pennsylvania” by John F. Meginness, the Baptist Church of Newberry was founded July 2, 1869. The building was bought “from Dodge and Company, who had erected it for an academy.” Also, according to an article in the Dec. 27, 1872, edition of the Harrisburg Telegraph, the “church was constructed with an upper audience room, and it was in this that the congregation had assembled” on Christmas 1872.

“The interior dimensions of the floor are 26 feet in width and 40 length. There was a centre girth, with joice thickly placed on each side. Through the centre from above were two bolts, connecting with the main girth,” the Harrisburg newspaper said.

It explained that “the weight of those assembled sprung the truss bearers, and those supports slipped out of their plates, precipitated the audience to the floor below.”

As the crowd of 250 fell, the scene was described a “wail of mangled humanity.” Children cried for their parents “as the groans of the wounded and dying” filled the air.

As the congregants tumbled to their fates, “oil lamps of the edifice had kindled a fire” that destroyed all “in a general conflagration,” the Harrisburg Telegraph said.

While this was happening, “many beneath the timbers (were) crying in the name of God for deliverance.”

It was described that “many within, who were able to reach a window, burst out the lights, and leaped to the grounds a distance of 14 or 15 feet.”

One unfortunate man was “fastened by a falling timber, (had) had his boots off, and his stockings were on fire when rescued.”

Another lady was heard to have shouted, “For God’s sake, rescue me from a horrible fate,” as the flames were almost upon her.

“(A gentleman) tore away scattering timbers and saved her,” the Harrisburg Telegraph recounted.

By 11 p.m. that night, the dead had been pulled from the wreckage while the church stood as a “silent monument of the horrible event.”

It was estimated that 15 people died, yet Meginness recorded the deaths of 13.

Additionally, more than 50 people were injured or wounded. “It is sad enough in its results, and we can only say God comfort the mourners, and alleviate the sufferings of the wounded,” the Gazette and Bulletin wrote on Dec. 26, 1872.

In the following year, the members of the church decided to rebuild on that site.

According to the Meginess’ history, “The church was rebuilt (and able to seat 300 people), made strong and safe, and dedicated on June 29, 1873.”

It was re-named Memorial Baptist Church to honor the dead. Church goers attended services there well into the 21st century. The church still stands, across the street from the Harvest Moon Restaurant on West Third Street, but has since closed.

When asked about the coincidence of the Notre Dame Church disaster happening before Easter, and the Memorial Baptist Church calamity happening at Christmas, she said ultimately a spirit of perseverance will win the day.

“Ours was a local disaster with many injuries and fatalities. Notre Dame is probably the greatest archaeological disaster of my lifetime,” Frey said. “But thankfully only a few injuries and no fatalities and I’m sure, as with our local church, Notre Dame will rebuild and continue as a beacon of man’s creativity and faith.” 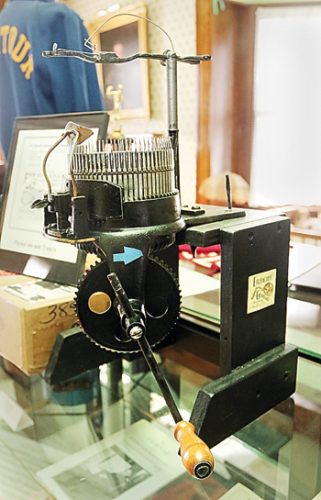