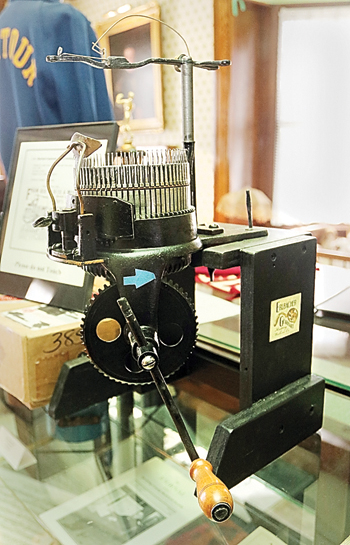 The Erlbacher Gearhart Knitting Machine, a sock-making device, was used from 1890 to 1925 and was important to troops serving in World War I.

For soldiers, having wool socks and dry feet could combat trench foot, but commercial sock manufacturers could not keep pace with a high demand for socks.

Kntting socks by hand could take a week, but a machine-made pair could be produced in a couple of hours. So women on the homefront were provided with circular sock machines such as this to help.

If the women met the sock quota, they could keep the machine, which would have cost $8 in 1890 when the machine came out, according to the Gen. John Burrows Historical Society in Montoursville where this one is on display.

The U.S. motto in the push to knit was “Knit for Sammies,” a reference to U.S. soldiers and Uncle Sam.

The knitters donated 24 million pieces of clothing for soldiers during the 19 months of the U.S. involvement in the war, according to “No Idle Hands: The Social History of American Knitting” by Anne L. MacDonald.

The knitting machine, along with the instruction booklet, was donated to the Burrows museum in 2018 by Barbara Reish of Montoursville.