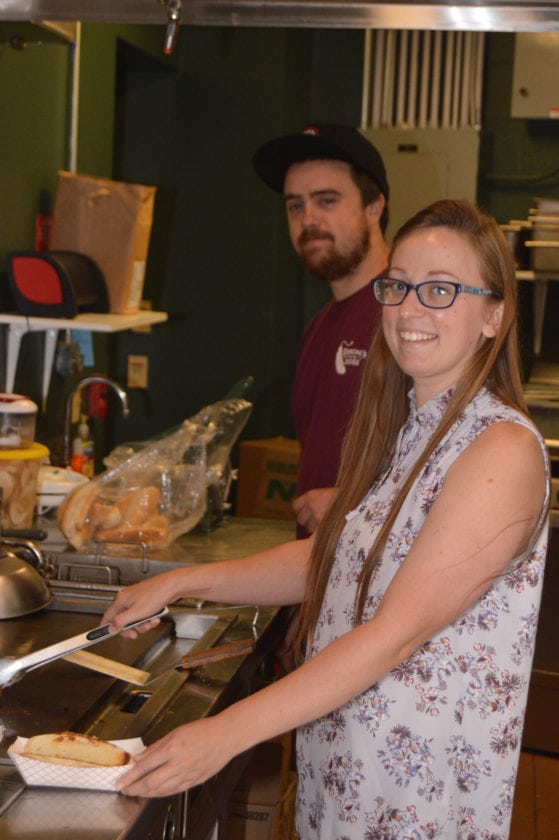 For followers of Derone’s Dynamite Dogs who’ve enjoyed the one-of-a-kind hot dogs for the past two years, there’s no need to be chasing down the food cart, because the business is now housed in the Transit Scoop on the corner of Pine and West Third streets.

Tom Derone, the man behind the idea of offering a different kind of fare for local residents, said he just decided one day that he wanted to be in business for himself.

“It was just kind of spur of the moment decision. I woke up one morning and thought, ‘you know what, I want to work for myself,’ “ he said. “I just wanted to do my own thing.”

Although Derone went to college for masonry, he became a bartender where he cooked quite a bit, which in turn led to the idea of a late night hot dog cart.

“Bloomsburg is popular for it. I kind of wanted to be the college, late night hot dog guy,” he said.

He started out locating his hot dog cart outside a local bar in order to get the late night crowd, but, after a couple months, discovered the growing demand for his unique offerings could be an opportunity for another move.

“We started getting emails and phone calls with all sorts of events. We got to a point last year that I had to start telling everybody that we’re booked for the year,” he said. Although it wasn’t everyday, Derone said every weekend was taken up.

The other half of the “we” Derone talks about is his girlfriend, Tatiana Kohler, who is another driving force behind the business.

“He talked to me and I said, we can do this. So we got the cart and started this adventure,” Kohler said. She noted that Derone is more a “fly by the seat of his pants” kind of guy and she is the planner in the partnership.

“It’s nice to have both, because I would be so cautious in everything. But he got us to where we are now,” she added.

In the beginning, they went out with their cart and they were able to get involved with events in the community, such as parades and things in the park. Kohler said it’s really great to see all the support they have gotten from the community.

At first they posted on social media where the cart would be located since it was sporadic and affected by the weather.

“Last year when we started, I was working bartending at the Bullfrog and at Kimball’s and doing this on the weekends,” Derone said. “My girlfriend as well. Anytime that we had free time we were pretty much out selling hot dogs. We found more success in the afternoons than we did in the evenings.”

They parked their cart at the corner of Maynard and West Third streets, working the lunch crowds at that location every Friday last summer.

“That’s where a lot of people got to see us. Everybody’s coming through there so much,” Derone said.

Deciding to locate to the Transit Scoop just kind of fell into their lap, he said.

“We were set up for First Saturday downtown across from Le Chocolat and we had Mr. Nichols come up to us and ask us if we were interested in space that he had,” Derone said.

William E. Nichols Jr. is the head of the River Valley Transit Authority which owns and operates the Transit Scoop. Derone’s Dynamite Dogs actually works in partnership with Harvey T’s, which is the restaurant. Harvey T. is the mascot for River Valley Transit.

“We’re working in partnership in the sense that Harvey T’s Hot Dog Express is the blanket of the establishment featuring Derone’s Dynamite Dogs in the kitchen,” Derone said. Everything in the kitchen is run by Derone and everything outside of that is run by Harvey T’s, such as the skill machines, the lottery and the register.

Moving inside has been a welcome change for Derone and Kohler.

“On the cart we’re dealing with something as wide as a table, it’s not very big,” he said. “Now I have the opportunity to do anything I’ve ever thought of with these toppings on the hot dogs. It’s allowed me to get more creative with everything.”

“Now I have access to a deep frier, so I can do french fries and potato chips. We’re going to start branching out,” he said.

All the fans of Derone’s Dynamite Dogs can relax because he added, “The hot dogs will always be the staple of what we are here. I’ve always talked about doing miniature sandwiches, like miniature cheesesteaks on an over-sized hot dog bun.”

Kohler said she and Derone joke about the fact that it took two years to locate to a shop, so in three years they should have some all over the east coast.