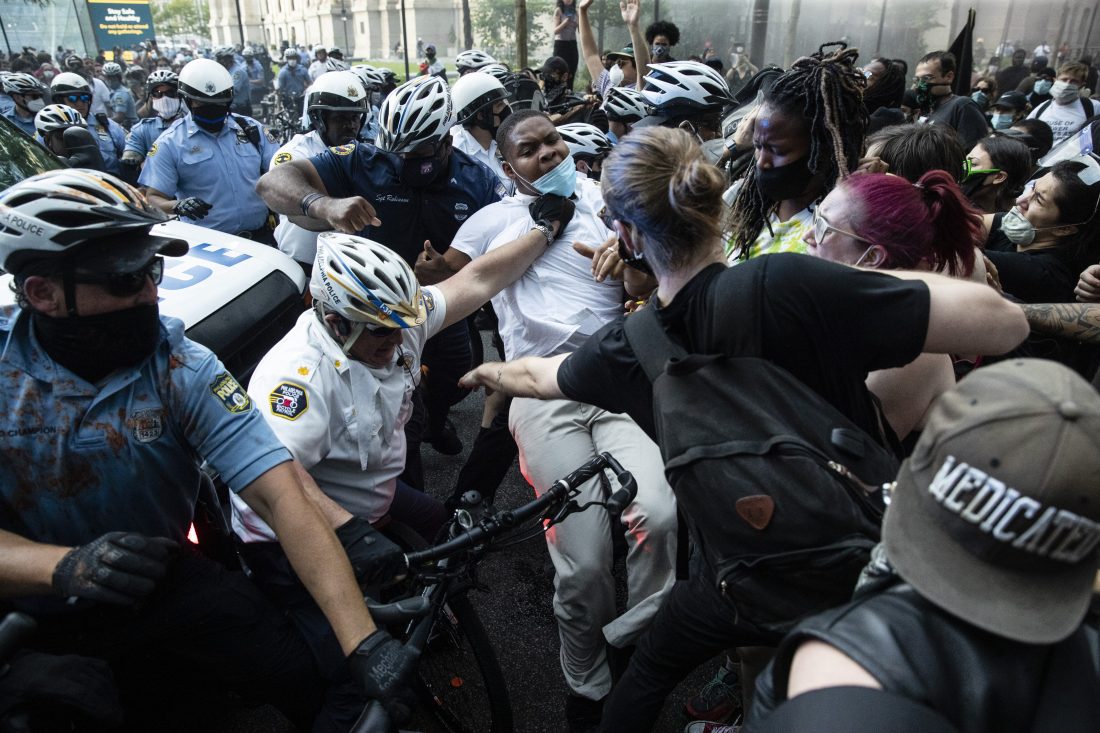 Police and protesters clash Saturday, May 30, 2020, in Philadelphia, during a demonstration over the death of George Floyd. Protests were held throughout the country over the death of Floyd, a black man who died after being restrained by Minneapolis police officers on May 25.. (AP Photo/Matt Rourke)

As demonstrators flooded streets across America to decry the killing of George Floyd, public health experts watched in alarm — the close proximity of protesters and their failures in many cases to wear masks, along with the police using tear gas, could fuel new transmissions of the coronavirus.

Many of the protests broke out in places where the virus is still circulating widely in the population. In fact, an Associated Press review found that demonstrations have taken place in every one of the 25 U.S. communities with the highest concentrations of new cases. Some have seen major protests over multiple days, including Minneapolis-St. Paul, Chicago, Washington, D.C., and Los Angeles.

The protests have come just as communities across the nation loosen restrictions on businesses and public life that have helped slow the spread of the virus, deepening concern that the two factors taken together could create a national resurgence in cases.

“As a nation, we have to be concerned about a rebound,” Washington Mayor Muriel Bowser warned Sunday after days of protests rocked the nation’s capital. New York Gov. Andrew Cuomo bemoaned the crowds, saying that hundreds could potentially have been infected, undoing months of social distancing.

A fresh outbreak in the places where protesters gathered could lead to reinstituting shutdowns.

The AP’s review focused on large metro counties — the central counties within metro areas with more than 1 million people — that showed the highest rates of new cases per capita over the past 14 days.

While case numbers and deaths have been trending down in several of the cities where the largest protests have occurred, the number of people in those places infected with the virus — and with the ability to spread it — remains high. And in some of the communities, such as Minneapolis, the number of people hospitalized with COVID-19 has been rising.

Floyd was killed May 25 after a Minneapolis police officer pressed a knee into his neck for several minutes, even as he pleaded that he couldn’t breathe. Minneapolis has been ground zero for the sprawling protests, which have crossed the Mississippi River into neighboring St. Paul.

The unrest has coincided with “the very worst days of the pandemic so far” in the Twin Cities metropolitan area, said Michael T. Osterholm, director of the Center for Infectious Disease Research and Policy at the University of Minnesota.

“Our ICU bed care is at its all-time high and is really on the edge,” he said.

Ramsey and Hennepin counties, home to the Twin Cities, ranked seventh and eighth for the highest per capita new cases in the AP analysis. Each has seen more than 250 cases per 100,000 population in the past two weeks, together reporting nearly 2,000 new cases in the last week alone.

Experts point out that other factors associated with protests could accelerate the spread of the virus. For instance, tear gas can cause people to cough and sneeze, as can the smoke from fires set by people bent on destruction. And both also prompt protesters to remove their masks.

Crowding protesters who have been arrested into jail cells can also increase the risk of contagion. An AP tally found that, thus far, more than 5,600 people have been taken into custody.

Protesters and police shouting at one another nose-to-nose also is raising alarms.

Osterholm and other public health experts note, however, that the protests aren’t necessarily as alarming as other events that could fuel new cases because they take place outside and many people are wearing masks. In some cases, hand sanitizer also is being informally distributed.

And Dr. David Eisenman, director of the Center for Public Health and Disasters at the UCLA Fielding School of Public Health, said he feared partisan forces might accuse cities of bringing fresh cases on themselves.

“I’m actually more worried about how, if those spikes occur, how that information will be weaponized against the notion of protests,” he said.

Eisenman called protesting an “essential activity,” possible to practice with reduced risk. He said his grown children protested in Los Angeles and are taking safety precautions now, including isolating themselves at home. They plan to get tested for COVID-19 in about a week.

Dr. Leana Wen, an emergency physician and public health professor at George Washington University, said the hospitalizations for coronavirus in the Washington metro area have been on the decline but that she knows that could change.

“There are a lot of unknowns about what happens next,” she said.

Wen was the health commissioner for the city of Baltimore during the 2015 uprising after the death of Freddie Gray in police custody and said many health clinics were closed and pharmacies burned down, making it difficult for members of disadvantaged communities to access health care.

It’s a concern for her now, too.

“You will have compounded health issues that go beyond COVID-19,” she said.

Public health experts said it will take two to three weeks to know whether the protests cause a surge in coronavirus cases. And even then, they can’t definitively tie it to the demonstrations.

The unrest is happening in tandem with the reopening of gyms, hair salons, restaurants, parks and beaches. It also comes on the heels of the Memorial Day weekend, when many people attended large gatherings, so experts already were bracing for a case increase, said Jennifer Nuzzo, an epidemiologist at Johns Hopkins University.

In Los Angeles, barbershops and in-person dining were allowed to resume last weekend, just as protests descended into destruction and more than 1,000 people were arrested. Nearly 10,000 new cases have been reported in Los Angeles County in the past week.

Hundreds of people also were arrested in Chicago, where Cook County has had among the highest per capita rates of new cases of any large county in the nation, with 283 new cases per 100,000 population in the past two weeks.

“The absolute number of cases is still high. We feel good about the fact that we’ve established a decreasing incidence, but we have a ways to go,” said Dr. Ronald Hershow, director of the Division of Epidemiology and Biostatistics at University of Illinois-Chicago.

Hershow and others noted that the racial disparities laid bare by coronavirus — with communities of color bearing a disproportionate burden of infections and deaths — overlap with the issues being protested on streets across America and around the globe.

“Racism kills,” Hershow said. “Sometimes that’s direct, as in the case of George Floyd. And sometimes it’s through a virus like COVID-19.”