Another year of increase in the opioid epidemic 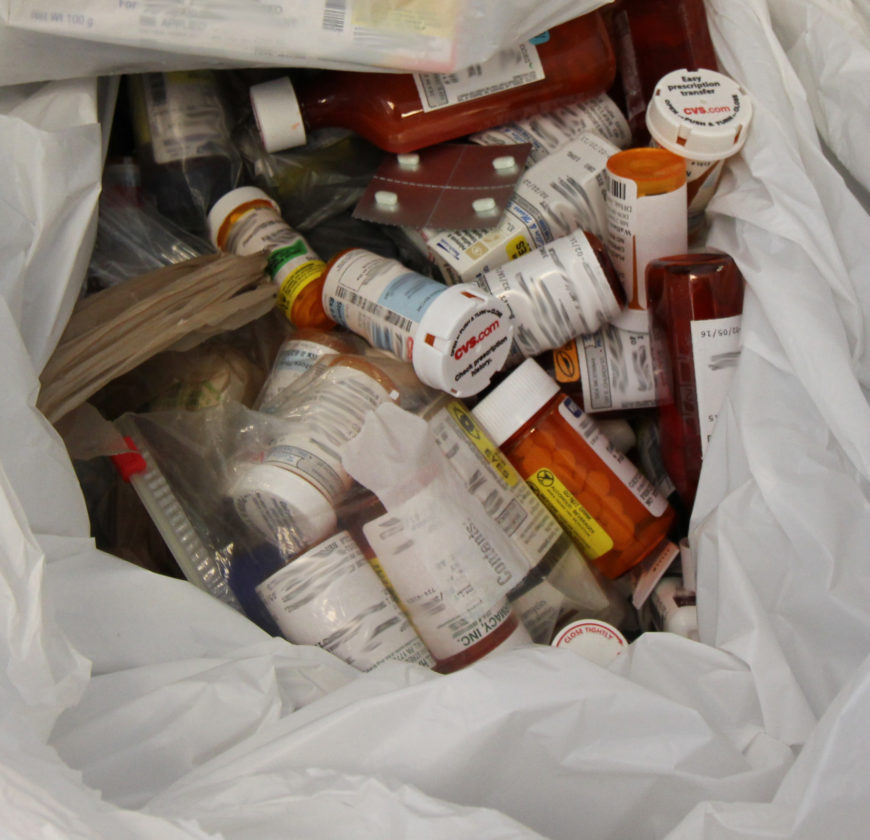 SUN-GAZETTE FILE PHOTO A box filled with expired and unneeded prescription drugs that were returned at a local drop box.

(EDITOR’S NOTE: Today the Sun-Gazette continues its annual review of the past year’s major news stories.)

The number of deaths from heroin or opioid overdoses in Lycoming County already had surpassed those of 2015 in early October, showing that the epidemic may be getting worse. But progress on many fronts is gaining momentum by those who are trying to make 2017 different.

By early October, a little over 25 people had died from all drug-related deaths with a few pending toxicology and autopsy reports, Lycoming County Coroner Charles E. Kiessling Jr. said.

“It’s hard to say what the year will end up at, but we are expecting it be more than that,” Kiessling said.

As of Dec. 5, his office had recorded 28 confirmed drug deaths for the year —  23 of them related to opiates. Sixteen involved heroin, specifically.

The number is a sharp spike from last year’s nine out of 25 drug-related deaths being from heroin, Deputy Coroner Jennifer Nolan said.

Like many others entrenched in the drug problem, the coroner’s office first noticed the severity of the issue around 2013.

“This epidemic began years ago, but we’ve seen a steady increase since 2013,” Kiessling said. “The numbers just kept going up every year.”

Those at the coroner’s office are the first ones to deal with an overdose death, so the numbers they keep updated are the tip of the iceberg, Kiessling said.

Because of the quickly escalating danger of the epidemic, it’s gotten the attention of many other agencies around the county.

Project Bald Eagle was carved directly out of the need for a cooperative effort to inform and combat the epidemic.

Created out of the county’s Heroin Task Force in April 2015, the project includes people from all aspects and institutions.

From 1990 to 2011, there was a rise in the prescribing of opioid drugs and, naturally, cases of addiction, said Steven Shope, project executive director.

“Information like that started getting around in the county and, in 2012, people started responding,” he said.

According to the project, one in four families in Lycoming County is directly dealing with opioid addiction.

One in eight people needs help with addiction, and the state has the capacity to treat a quarter of them, Shope said.

Since its creation, the project has focused on educating people on the issues, including many of those chilling statistics.

“There are two things to focus on at the end of the day,” Shope said, “getting people who are addicted into treatment, and introducing new forms of treatment.”

A significant milestone for the project this year was getting into schools and being able to present to students as well as their families.

“A huge part of the epidemic are the kids that will be dealing with it in the future,” Shope said. “And getting into the schools and informing them and their families of the basics and the significance of the epidemic is the first step in any successful stride in fighting this. Being aggressively active in schools is going to become a primary focus of the project in 2017.”

On an organizational level, the project has been fortunate in developing a federally recognized coalition that includes someone from just about every segment of society, Shope said.

“Many counties see what we are doing and want us to help start something similar in their counties.”

Shope said he hopes prevention through education with other counties may open up a possibility for a regional approach in the state, adding to what will need to be a concerted effort.

About 2 1/2 years ago — matching when other organizations that would prove crucial in combating the opioid crisis in the county first noted the issue — state Sen. Gene Yaw, R-Loyalsock Township, was approached on the floor of the Senate about using The Center for Rural Pennsylvania as a tool to raise awareness about how serious the issue had become and what to do about it.

“Up until then, it was mostly seen as a center city or more urban issue,” Yaw said. “But now it has branched out.”

Part of the reason heroin has become such a huge problem is the way it is marketed, he said.

“Those dealing it are using sophisticated marketing just like any other retailer.”

As a first movement to understand all corners of the issue, the center began hearings in late spring of 2014, Yaw said.

Since then, it has held 11 hearings throughout the state, involving over 70 hours of presentations.

“This is a communitywide effort and it affects everyone — even the people that say it doesn’t,” Yaw said. “Health care, law enforcement, prisons … all of those are direct costs to everybody.”

Since the hearings, there have been strides in the state Legislature that will play a part in fighting the epidemic.

In early November, five opioid-related bills were signed into law.

Yaw sponsored two bills that require prescribers and dispensers to be educated in pain management, identification of addiction and the use of opioids as treatment and another that sets a seven-day limit on prescriptions for minors, unless there is a medical emergency that puts the child’s health or safety at risk.

Another recent bill requires a medical training facility to include opioid-related curriculum to educate professionals on a previously under-emphasized aspect of health care, Yaw said.

“Under the bill, doctors or anyone with a license now must have two hours of training prior to getting their license renewed,” he said. “Before this bill, there was no requirement or training in medical school in pain management or prescription dispensing.”

Another crucial part of the bill is the prescription drug registry that requires a dispenser or prescriber to check the registry before they issue opioids to make sure the person isn’t “shopping” around at different pharmacies for opioids.

“It’s like putting together a rope and each problem you address puts another piece on the rope and it gets stronger.”

An area discovered from one of the center’s hearings was a specific issue of the care of addicts’ children, Yaw said.

“We heard testimony at one of the hearings we had in Indiana County months ago and there was a grandmother testifying that she has custody of her daughter’s three or four children,” he said.

Simple school or legal documents were difficult for the woman to have completed before getting legal custody of her grandchildren, Yaw said.

“The mother’s location is unknown. The father is in prison. How does a 74-year-old grandmother taking the role of parent get health care for these kids?”

It’s hard to say what 2017 will look like, but the tragedy doesn’t seem to be slowing down, Kiessling said.

“The narcotics enforcement officers are continuing to plug away to get dealers off the streets and hopefully more people will seek treatment rather than continue to use,” he said.

Until then, the coroner’s office will join the project in educating the public and recording the numbers, hopefully witnessing them decrease, he said.