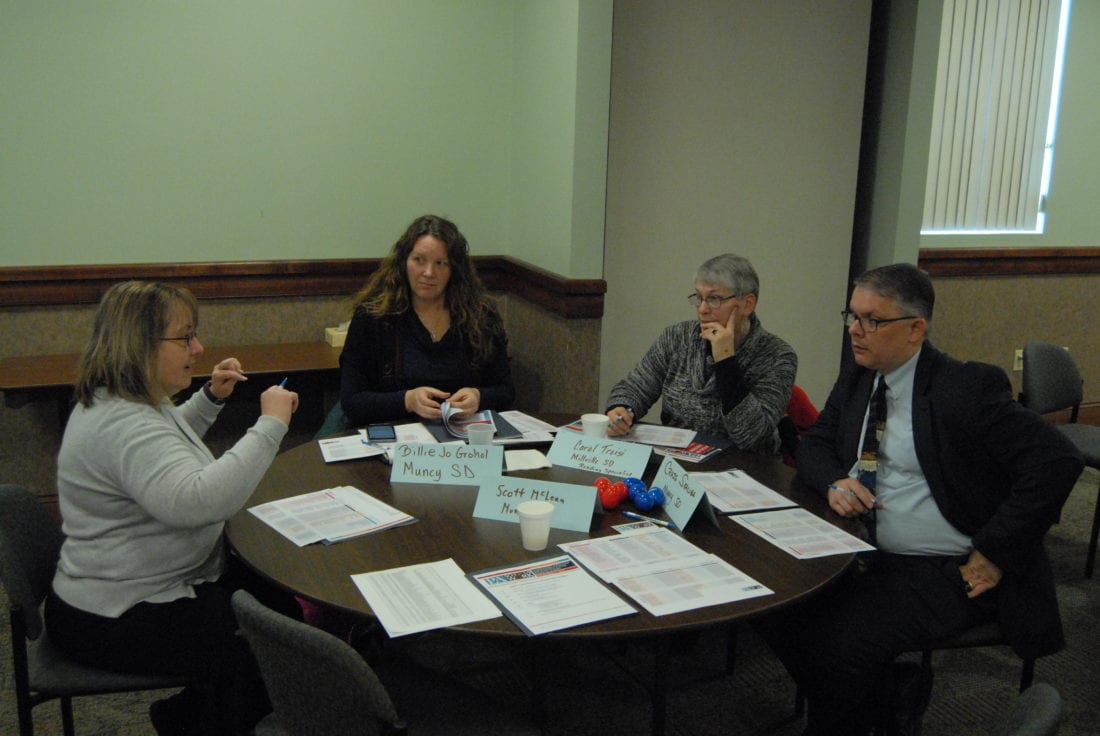 School and community leaders gained new tools in their advocacy for more funding in public schools Saturday at a regional summit, telecasted at the BLaST Intermediate Unit on Reach Road.

About 20 people traveled to Williamsport to hear speakers from Luzerne, Lehigh, Cumberland, Montgomery, Crawford and Clinton counties and learned how they could implore congressmen to invest in Pennsylvanian students.

DiRocco said there’s many times he talks to legislators who say they’ve never heard from anyone in their district advocating for more public school funding.

“I think a lot of times people think someone else is contacting them, but you, yourself, have to contact them and make that effort. Whether it’s a visit to their office or pick up your phone and call them, that makes a huge difference,” he said.

DiRocco said he understands the budget challenges the state faces and there are only so many revenues that come in but, “we also know that public education has not received a share of the funding that’s needed for some time now and it’s time to put public education first.”

Particularly, DiRocco said, both in Pennsylvania and across the nation it’s obvious that more skilled laborers are needed, but the Career and Technical Education schools are underfunded.

“I think it’s really important we put more money into career and tech education because we do have a real shortage of anyone in the trades,” said Erin Jaellonski, treasurer of Lewisburg Are School District. “Everyone knows this, there are not enough plumbers, electricians and mechanics to take on all the jobs that are emerging right now. Everyone who is doing that is in their 50s or older.”

“That’s kind of scary,” she added.

“I’m embarrassed by that,” she said.

Custis said if Pennsylvania would invest more into public schools, it would lead to a better economy, less poverty and would cause a rise in graduation rates.

Currently, said Mia Tomea A. Sippio-Smith, the state picks up 37 percent of the cost of public schools, on average, which means schools must rely more on property taxes to make up for the difference, something most people despise. Additionally, the state only picks up 10 percent of CTE programs in schools.

What’s worse, she said, is Pennsylvania has the largest spending gap in the United States. Over the last 4 years, funding has increased $90 million, while most estimate $200 million to sustainably fund public schools.

Kelly Thompson and John Callahan, lobbyists at Pennsylvania School Boards Association, said the midterm elections won the Democrats some seats but they took many moderate Republicans who would have been more sympathetic to increasing public school funding.

But most legislatures would want to be able to say they helped school funding, Thompson said.

“Telling you that they support it is not enough,” she said. “You can always ask them to do more.”

If not, advocates should refocus their arguments to address concerns that many conservatives have, such as school safety, mental health support and property taxes.

Attendees later broke into groups to brainstorm ways to engage legislators, grow the coalition, mobilize neighbors and leverage the media. They also received an advocacy toolkit, which included options to get the word out, such as meeting with legislatures, planning public events and utilizing their social media.

Corey Jusko, president of the Parent-Student Association for Lewisburg Elementary Schools, said it was enlightening to hear that it is up to regular people to reach out to local representatives and to create a relationship.

“This is something that’s important to us, they need to be aware of that,” she said. “They’re people, they want to know what our experiences are too.”