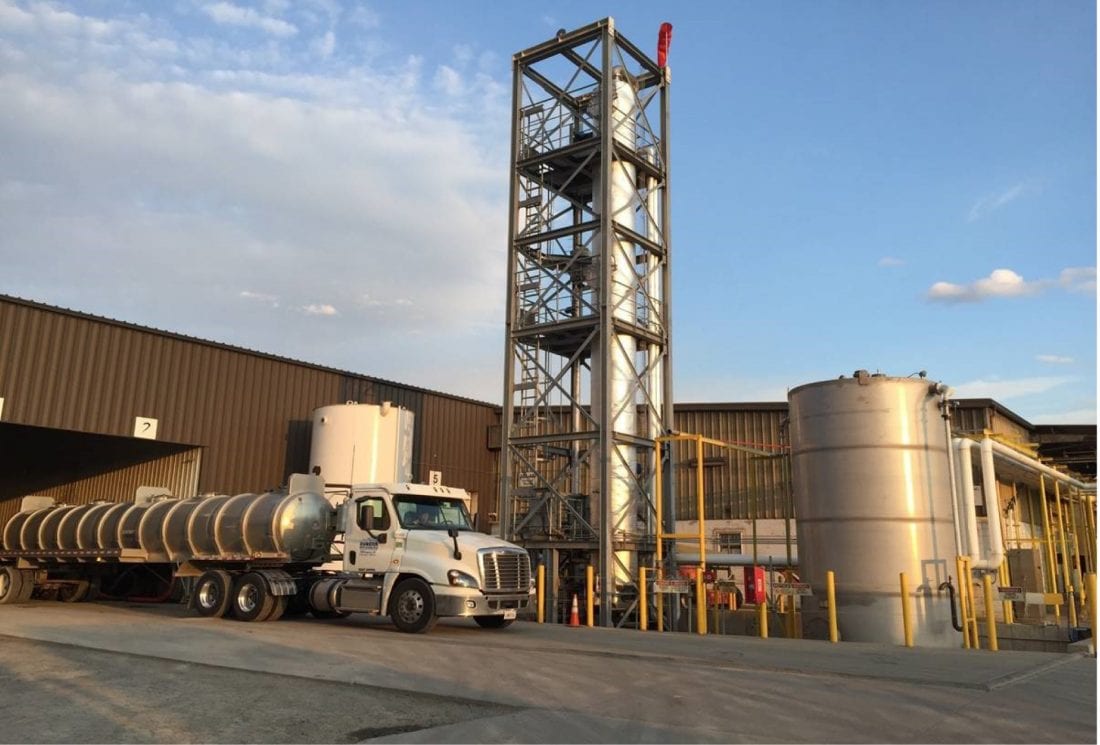 2nd St. Facility – View of Methanol Column and tank. One of Eureka Resources trucks filling up withMethanol in a designated loading area. Methanol is one of the many materials that are recovered fromthe patented technology processes that Eureka Resources has developed. These technologies help to meetgrowing demands for various recovered materials while simultaneously making a positive environmentalimpact.

For every soldier on the battlefield, electric car battery or guts of a smartphone or solar panel, there is lithium to help power them.

Now, a Williamsport-based company has been able to extract the mineral right beneath the region’s feet.

Through a patented process, Eureka Resources, headquartered at 454 Pine St., has developed a technique at its Bradford County plant to extract the rare earth mineral — in high demand and short supply in the United States — from wastewater flowback used in the hydraulic fracturing process in the Marcellus Shale.

“We’re excited our company that purifies water, salt and pure calcium chloride is on track to be one of the world’s first commercial rapid lithium recovery system operators,” said Daniel A. Ertel, company president.

Ertel discussed the company’s processing and storage plant in Standing Stone Township, near Wysox, Bradford County, where the lithium is stored in the form of brine in tanks.

Eureka has joined forces with another company, MGX, to become the first and largest producer of petroleum brine-based lithium, he said.

Currently, much of the commercially and strategic lithium must be imported from South America and China, Ertel noted.

“Every soldier sent in the field wears gear with lithium on it,” Ertel said. “Cars that are electric use ion lithium batteries.”

That is critical because it attracts “feeder” businesses that often move closer to the supplies to cut down on travel and other expenses.

Eureka was recently awarded a $1.5 million state Redevelopment Assistance Capital Projects grant for the process and its expansion, said Sid Furst, a specialist at the economic consulting firm of Penn Strategies Inc., which serves as the city’s economic development strategist.

“The potential economic impact of the expansion, partially financed by the grant, is the substantial increase of domestic lithium production by 50 percent,” Furst said.

The business grant will help to produce 15 to 20 additional positions and expand capacity and treatment and recovery of the by-product of natural gas hydraulic fracturing, he said.

Due to the needs of consumers, the consumption of lithium has been increasing and the Eureka-MGX partnership will help the nation overcome its competitive gap related to lithium production, Furst said.

In all, the company plans to extract 950 metric tons of lithium chloride a year, said state Sen. Gene Yaw, R-Loyalsock Township, who helped guide the grant through to Gov. Tom Wolf’s approval.

U.S. consumption of lithium is 3,000 metric tons, but is increasing with companies like Tesla and others, Yaw said.

Tesla has battery charging stations at Sheetz stores in the city and region and other car companies are developing electric vehicles, he said.

The electric vehicle industry alone is going to consume about half of the world’s total lithium production in coming years, Yaw said.

If the company proceeds with its planned capacity expansion of the Standing Stone facility to 10,000 barrels per day, the concentrated brine stream will double in size and MGX has agreed to supply another lithium extracting unit, Yaw said.

The upgrades will also allow for a major increase in pretreatment and sodium chloride crystallization capacity, provide systems necessary for recovery of methanol and calcium chloride byproducts, provide additional liquids and byproduct storage, and provide much needed natural gas service to the facility.

“Eureka has a proven track record of treating wastewater and protecting the water quality of our rivers and streams across Pennsylvania,” Yaw said.

The regional economic benefit of the process is an important component of the well drilling for gas and oil.

“Lithium remains a necessary element and important mineral extracted from wastewater in natural gas and oil,” said Jason Fink, president of the Williamsport/Lycoming Chamber of Commerce.

“It’s exciting to be able to see the useful byproduct from the flowback they’ve got in wastewater they treat,” Fink said.