Collapse of Berlin Wall signaled end to the Cold War 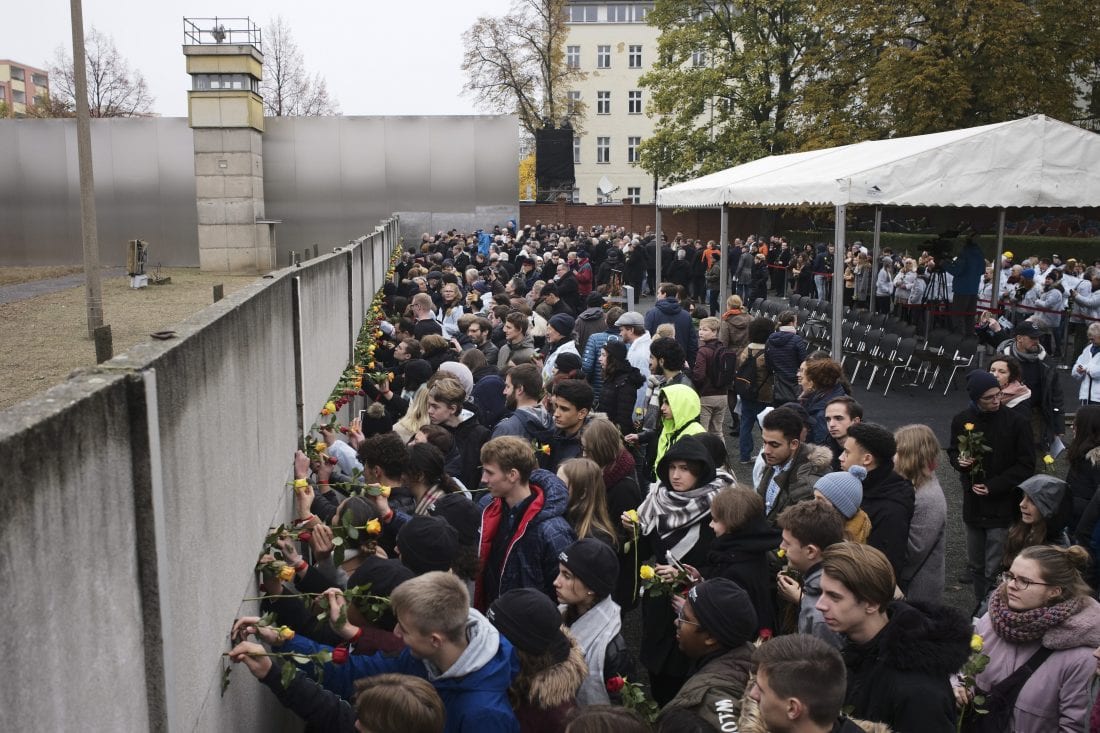 People stuck flowers in remains of the Berlin Wall during a commemoration ceremony to celebrate the 30th anniversary of the fall of the Berlin Wall at the Wall memorial side at Bernauer Strasse in Berlin, Saturday, Nov. 9, 2019. (AP Photo/Markus Schreiber)

Perhaps no event symbolizes the end of the Cold War more significantly than that of the collapse of the Berlin Wall 30 years ago.

On Nov. 9, 1989, a tidal wave of East Germans poured across the West Berlin border separating them from their West German neighbors when travel restrictions into the free country were lifted.

Scholars and historians offer up different theories regarding the collapse of the so-called Iron Curtain separating the Warsaw Pact, the group of Eastern and Central European nations under the Communist Soviet Union, and the West.

A principal reason can be traced to the prosperity and personal freedom enjoyed by the West and the “economic and political morass of the East”, according to Lee Edwards, an author and leading historian of American conservatism.

Edwards noted the fall of the wall was preceded by decades of “political tyranny and economic backwardness.”

“The once impregnable Iron Curtain was breached by modern communications and technology, allowing the people of Eastern Europe to see how the other half of Europe lived,” Edwards wrote. “Increasingly, Poles, Hungarians, Czechs, East Germans and other peoples demanded reform, not only in the marketplace but in the realm of human rights and civil liberties.”

Also, there had developed an abandonment of communism by communists and after Mikhail Gorbachev was named general secretary of the Soviet communist party in 1985, he made the decision not to interfere in the affairs of other communist regimes, rejecting the Brezhnev Doctrine that would prompt Moscow to action to ensure a communist state did not fall.

Lee credits U.S. President Ronald Reagan as the leader most responsible for the fall of the wall when he stood in front of the Brandenburg Gate in June 1987 and issued a direct challenge to the Soviets, “Mr. Gorbachev, tear down this wall.”

Two years later, the wall came down “because of the Reagan Doctrine, which applied economic, political and strategic pressure (including the Strategic Defense Initiative) on Moscow.”

Hope Harrison, an associate professor of history and international affairs at George Washington University and author of the book, “After the Berlin Wall: Memory and the Making of the New Germany, 1989 to the Present,” noted that many American incorrectly believed that Reagan’s speech in Berlin led to the wall’s fall.

However, it was Gorbachev’s reforms in the Soviet bloc and the actions of East Germans that were far more important than Reagan’s speech, she noted.

Mass protests against the regime prompted thousands of East Germans to seek refuge in West German embassies in Eastern Germany. This prompted East German leaders to waive the old visa rules requiring citizens to have a pressing need for travel.

A Communist Party official who announced the changes, Guenter Schabowski, had missed most of the key meeting about travel procedures and went unprepared to a news conference on Nov. 9. He told reporters that the new law would take effect “immediately and without delay.”

“Over the next several hours,” Harrison noted, “thousands of East Berliners gathered at the checkpoints along the wall. Since the country’s leaders hadn’t intended to completely open the border, the supervisors at the crossing points had received no new orders.”

What followed was a “growing masse of increasingly angry East Berliners” expected to be let through and eventually allowed to pass to the other side.

In the weeks that followed, East German authorities removed pieces of the wall to create more crossing points.

Official demolition of the wall began in the summer of 1990.

Danny Chirdon, of Tivoli, a U.S. Army veteran who served in Desert Storm and two assignments in West Germany, recalled the wall as a stark contrast to what his own country stood for — freedom.

“They (East Germans) kept people in and kept people out,” he said. “At the time we were there, that’s what we were defending against.”

Chirdon returned to Germany this past summer to dedicate a sports field he had helped build while in the Army years earlier.

Times, he realized, had changed since the Cold War days and the whole atmosphere of the nation now uniting East and West certainly seemed improved.

He had only seen Germany as a divided nation with the wall separating East and West.

Now, nearly 30 years later, the wall had long since fallen.

“The local people I know there thought it was a good thing,” he said.

Masks vs. freedom: ‘Do no harm’

Severance tax would be harmful

State of my mind