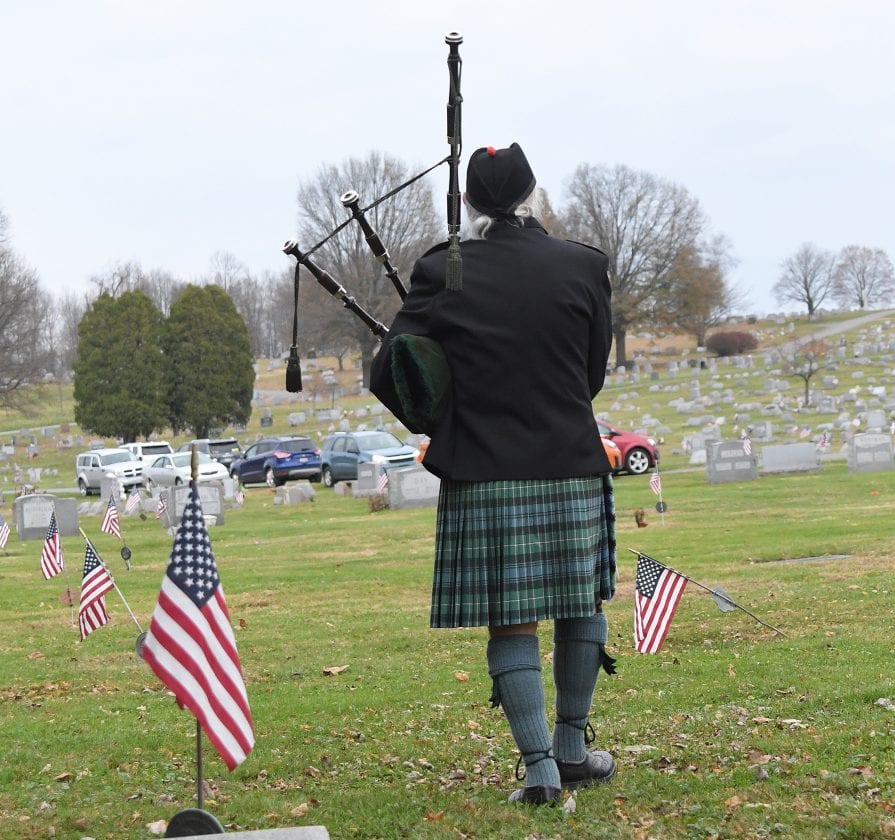 RALPH WILSON/Sun-Gazette Correspondent Arno Vosk performs a postlude on bagpipe at a Veteran’s Day ceremony at the Montoursville Cemetery on Monday. Veterans from Montoursville and surrounding areas gathered along with their families and friends to honor all who served in war and conflicts.

Well before the rifle salute and the playing of “Taps” and Arno Vosk had closed the event with his bagpipes rendition of “Amazing Grace,” a decided feeling of solemnity surrounded the Veterans Day ceremony held under gray November skies at the Montoursville Cemetery.

A state lawmaker, an author, a clergyman and a high school student reminded those gathered of the sacrifices of those who’ve served their nation in uniform.

Rev. Robert Rice, of Muncy Baptist Church, said those who’ve served in war had to have faith. Otherwise, their fighting would have been in vain.

What he referred to as “selfless love in action” resulted in the freedoms American enjoy to this day.

“We say thank you today to our veterans,” he said.

Alivia Tagliaferri, a local writer and author of the book, “Beyond the Wall: The Journey Home”, recalled her first veteran’s story she heard as a young child.

It involved an uncle who was wounded at the World War II battle of Iwo Jima.

“He showed me a scar,” she said. “That story really stayed with me.”

She said she’s always been appreciative of those stories, which serve as reminders of what veterans sacrifice.

Alex Lecrone, a Montoursville Area High School junior, told of interviewing a close family friend, John Crossen, who fought in the Gulf War, where he earned a Purple Heart.

Crossen, she said, spent 11 years in the military, which also included helping people in foreign nations build schools and homes and performing other outreach service.

“The military, she said, taught him “to be a part of something much bigger than himself.”

State Sen. Gene Yaw, R-Loyalsock, who served in the U.S. Army from 1964 to 1968, said he joined because it seemed like the thing to do at the time.

But he came to appreciate his years of service.

He learned, he said, to work together with people from diverse backgrounds.

“That’s something we should all promote,” he said.

Yaw reminded the audience that freedom is not to be taken for granted.

“Two things to remember to preserve our way of life, the grace of God and the U.S. military,” he said.

Yaw also called for bringing back the military draft.

He added, “I’m a firm believer in universal public service. Why not two years of your life to serve your country? It can be different ways, such as the Peace Corps.”

The names of deceased veterans buried in the cemetery were recalled during the event.

In defense of Iowa