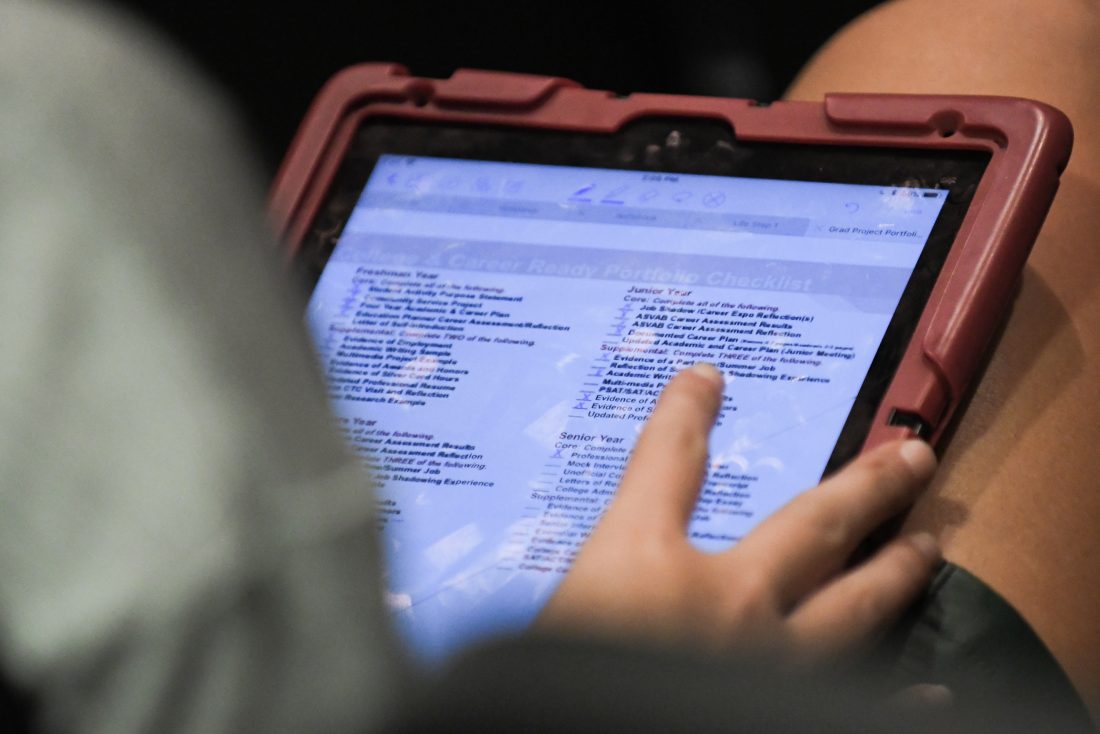 RALPH WILSON/Sun-Gazette Correspondent A student at Loyalsock Township High School uses her school-issued I-Pad to track her progress on a career readiness checklist during an assembly on Friday. The school was recognized as an Apple Distinguished School for the 2019 to 2022 period. The honor provides the school a number of opportunities to share their success story of using technology in the classroom including participation in conferences and hosting school visits.

To cheers and applause in the Loyalsock Township High School auditorium Friday, students and staff learned they were awarded the prestigious Apple Distinguished School award from the computer giant.

The district received the award for its continuing education, use of innovation with iPads and learning in the school environment.

Some perspective on the level of the achievement was provided by Paul Tackac, Apple senior account executive. The district is one of 300 schools in the U.S. and 170 more in 33 countries in the world to be listed as an Apple Distinguished School, he said.

Over the next three years, the district will be recognized and act as a host school for other schools visiting to showcase best practices and use of Apple iPads.

Collin Porter, Natalie Van Dort and Curtis Trowbridge were among the student ambassadors describing how the iPad technology has helped them to become better learners and integrate innovative technology into their learning and their world.

Porter noted how it has change his and other students’ lives for the better. “It’s imperative in competing in the workforce, college or military,” Van Dort said.

Trowbridge said it enables work to get done when people can’t assemble.

The pads help students by saving them time on their homework, doing research, but they also provide abilities to do video presentations and apply aspects they will encounter in the workforce or college.

It’s Apple’s mission to enrich lives and the iPad was likened to a “mental bicycle,” which gives students the ability to reach their creative potential.

“Every learner is at heart a creator,” Tackac said.

With the iPad, the users takes ownership of his or her learning, further empowering them, he said.

Tackac said the computers are high value devices, but with software designed for mobility, accessibility and collaboration.

“My colleagues in Pennsylvania, across the nation and around the world need educators, learners and partners to help convey that story,” he said, adding that’s what Loyalsock Township has become with the award.

Matthew Reitz, high school principal, said the award is a testament to the students and the teachers who work tirelessly in preparing the students for their classwork and eventually their chosen career paths.

Gerald L. McLaughlin, superintendent, thanked the administration team doing the research and for taking the plunge.

“We ordered 650 iPads with the intention of using our technology to support our curricular programs,” he said.

Teachers, administrators and others received training during the initial purchases and continued to find ways to use the technology that they never thought could happen, he said.

Today, students use the iPads to conduct research and access information quickly and bring to life achievements in the classroom, sports and extra-curricular activities.

For Paul Young, district board president, substantial investment in the iPad program has paid huge dividends.

“It has allow us to put Loyalsock Township on the map as a leader in the use of the technology,” Young said.

McLaughlin also observed how the challenge is not over and the district will continue to educate, engage and motivate its students to use the technology to their fullest potential.

As an added bonus, as the Department of Education provided details this week on annual school performance, the district received an overall rating of 85.9 percent.

“We are the top-ranked high school in both Lycoming County and the Intermediate Unit, which consists of 19 area schools,” he said.

The assembly also celebrated American Education Week, which McLaughlin noted was a “tribute to all the people in our education system.”

Visitors to the assembly congratulating the school included state Sec. of Education Pedro A. Rivera and state Sen. Gene Yaw, R-Loyalsock Township, who serves as the district solicitor.