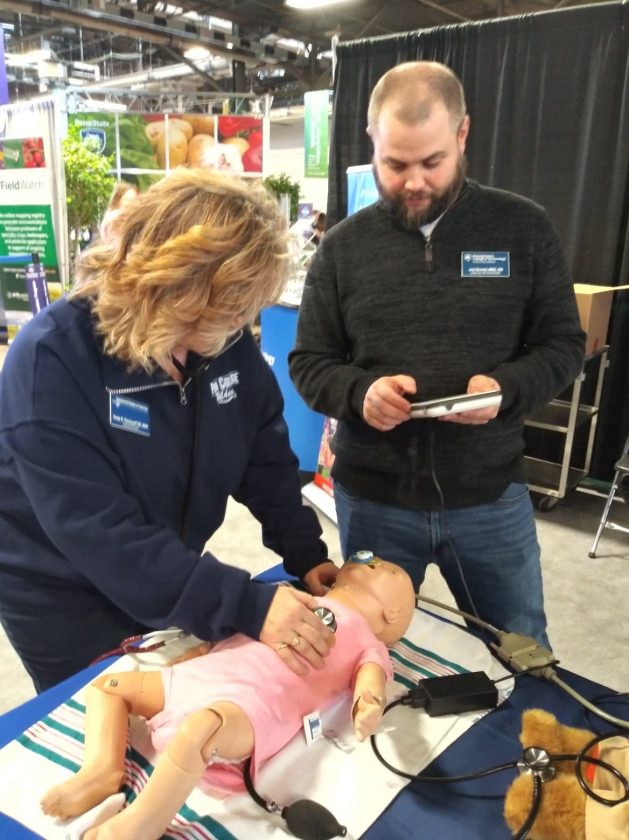 A lifelike “infant” displayed at the Pennsylvania Farm Show in Harrisburg cried, cooed and was assessed for life-threatening and normal heart sounds and respirations.

“That’s vital with real life viruses such as Respiratory Syncytial Virus,” said Tonja Pennycoff, a registered nurse and instructor with the Pennsylvania College of Technology.

RSV is a common virus that often causes cold-like symptoms and small airways of infants become inflamed, swell and get clogged with mucus.

“Babies can’t cough up mucus and if they get a virus that causes mucus to increase and become thick, it can be life-threatening,” Pennycoff said.

Crowds gathered around the simulation as Pennycoff and Joel Brooks, a second registered nurse and instructor, monitored the simulation station allowing show attendees to put a stethoscope in their ears and listen to the baby breathing and its heart beat.

Not merely a teaching tool for nursing students, it was the opportunity to assess lung and heart sounds on a baby and that meant it could possibly help to save a life this winter or beyond, Pennycoff said.

The college’s School of Nursing & Health Sciences said the mannequin can replicate many characteristics of infants, which becomes critical, especially in winter months when colds and flu viruses are spread more, the nurses stated.

The simulation also brought laughter as the baby garbled jibberish and cooed happily.

The instructors finally connected a digital device to register the baby’s heart rate.

“The simulation helps in the clinical setting prepare the nursing students for what they might encounter with infants,” Brooks said, acting just as pleased to teach the attendees, including children, about infant issues.