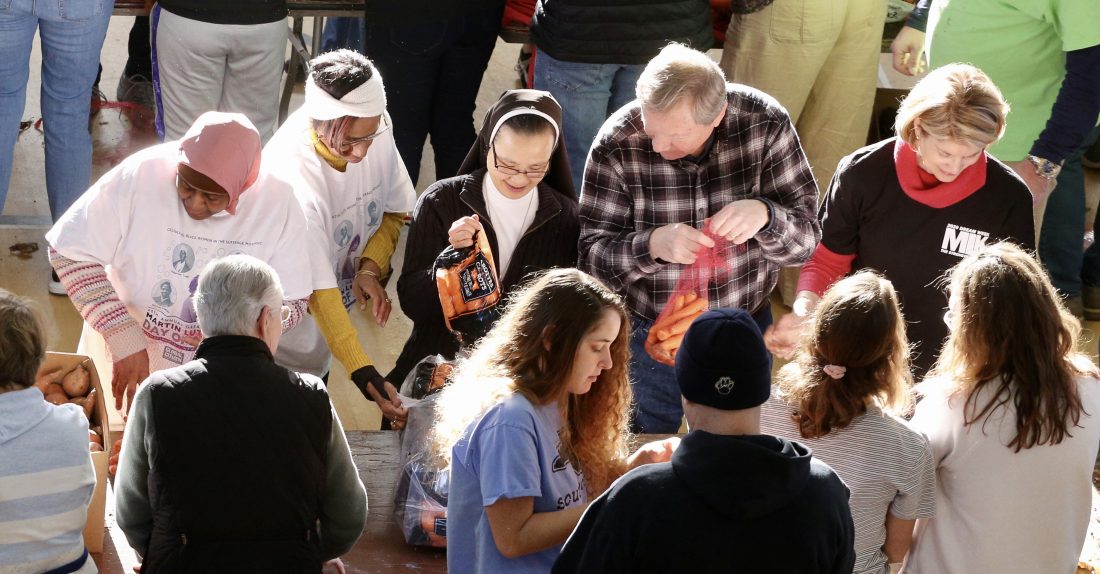 Nearly 450 people from all walks of life came together to volunteer their time Monday to pack 2,250 meal kits and 1,000 backpacks for families in need throughout our area.

In all, the volunteers helped move 12,000 pounds of fresh produce for the Martin Luther King Jr. Day of Service project at the Lycoming College Recreation Center.

With hunger remaining a persistent issue in the area, the packed meals will be on the tables of families in need within the next few days, he said.

“Most of these meals are going to stay fairly local because we need them,” said Arthur.

Volunteers this year were given the additional responsibility of assembling boxes, organizing the assembly lines for the 10 packing stations and loading boxes onto pallets, according to officials.

The additional time spent volunteering this year allowed for participants and organizations to network with each other, which Jim Plankenhorn, president and CEO of STEP Inc., said is pivotal to serve the “whole person and whole family.”

“It’s just really serving the needs of the community,” he said.

“It’s just a great opportunity to come together and, and work together and solving the community’s needs because everybody’s situation is different,” said Plankenhorn.

People have to meet their essential needs to achieve their goals, and a clear need in the area is food security, he said

It was “humbling” to see different people and organizations work alongside each other, he said

“It really is when folks come together and work together and put their individual organizations aside, so to speak, and work for the greater good of all, that’s when the greatest impact can be made,” said Slaughter.

Among the helpers were community peer educators from Pennsylvania College of Technology, who said they were surprised that packing bags could be so helpful in the community.

“I think that’s a testament to the work of the food bank and of the local community organizations, because (hunger) is not as visible,” said Ethan McKenzie, an educator.

McKenzie said he credited the food bank with calling attention to the need in the area.

Donna Barner, a volunteer with STEP/Americorp, helped to coach other volunteers on packing bags.

“I think it’s awesome,” she said. “I’m glad to see that so many people came out to help.”

Among those was the area’s first girl scout troop with Boy Scouts of America, which started in Feb. 2019.

“I think it’s really cool,” said Megan Adams, of Montoursville. “I think of it as like, ‘doing unto others as you would have them do unto you,’ because if I were in their place, I would like someone doing this kind of good stuff for the community.”

Butch McCusker, advancement chairmen with BSA, said the girls were learning about some of the issues in the area.

“We firmly believe that the more we can get youth involved in service to the community now, as they get older it’ll be more natural for them,” he said.

The girls, who already make routine outings to assist at the food bank, plugged in easily to assisting at the day of service, McCusker added.

The week concludes at 7 p.m. Thursday with Mike Africa Jr.’s “Never Give Up” speech at Penn College’s Klump Academic Center.