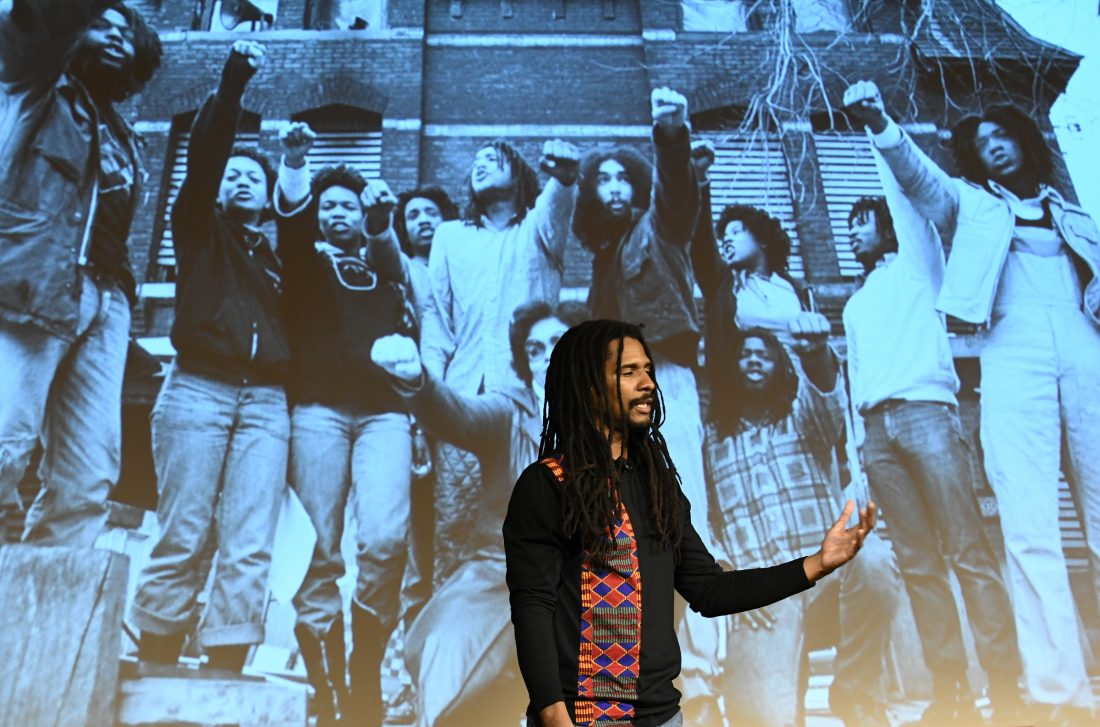 MARK NANCE/Sun-Gazette Mike Africa, Jr. stands in front of a photo of members of MOVE during his "Never Give Up" presentation at Pennsylvania College of Technology's MLK Dream Week Thursday.

People should look inward for a form of government, said a member of MOVE to an audience of about 50 at Pennsylvania College of Technology’s Klump Auditorium Thursday to conclude Dream Week.

“It’s time for people to rise up and change,” said Mike Africa Jr. during an opening rap.

Revolutionaries such as Martin Luther King Jr., Malcolm X, and Che Guevara were all killed because of the change they aspired to make by governments that wished to maintain the status quo, said Africa.

MOVE posed a threat to the government because it was cutting into its cash flow by opposing the ways that the system controls people, animals and the environment, Africa stated.

On Aug. 8, 1979, after a year-long standoff with the Philadelphia police in the western part of the city, police swarmed their commune.

“Shots fired, hundreds of rounds of ammunition at a house filled with men, women and children,” said Africa.

High-pressure water cannons were used and several members were severely beaten, he added.

During the struggle, a police officer died, and though there are still questions concerning his death, nine members of MOVE were charged with homicide and sentenced to prison times ranging from 40 to 100 years, including Africa’s parents.

Mike Africa Jr. was born in prison, and raised by his grandmother and some remaining members of the MOVE organization.

The MOVE organization continued along Osage Avenue, where the city continued to attack them, he claimed.

In 1985, the Philadelphia police evacuated the street and surrounded the area under the premise of building code violations, said Africa.

Planning to create an opening to insert smoke into the home, a helicopter dropped two explosives, he continued. However, this started a fire in which many homes were destroyed and 11 MOVE members died.

Despite this, Africa worked the strategy his father pioneered to free some members of MOVE who were imprisoned during the 1978 standoff.

“It says the system is controlled by pressure. We’re going to keep the pressure on the streets, and the courts and in the prisons,” said Africa.

In 2018, Debbie and Mike Africa Sr. were placed on parole after 40 years in state prisons.

The Africas, together now, are working to have other MOVE members placed on parole.

To stay strong and fight the powers that be, Mike Africa Jr. said people should plant a garden, share food and get to know their neighbors.

“When you work together and build a community, when you have all of that level of power and influence, you should influence the people that are running the country or running your district to do what is necessary for your district,” he said.

A group of people working together towards a common goal is the basis of what enables effective change, said Africa.

“Building community is the absolute most powerful thing that you can do to fight the wrongs,” he said.

Working towards change is an everlasting principle, rather than a point that will fade over time, he said.

“Get involved in it. This is not a fad, this is a lifelong commitment,” he said.