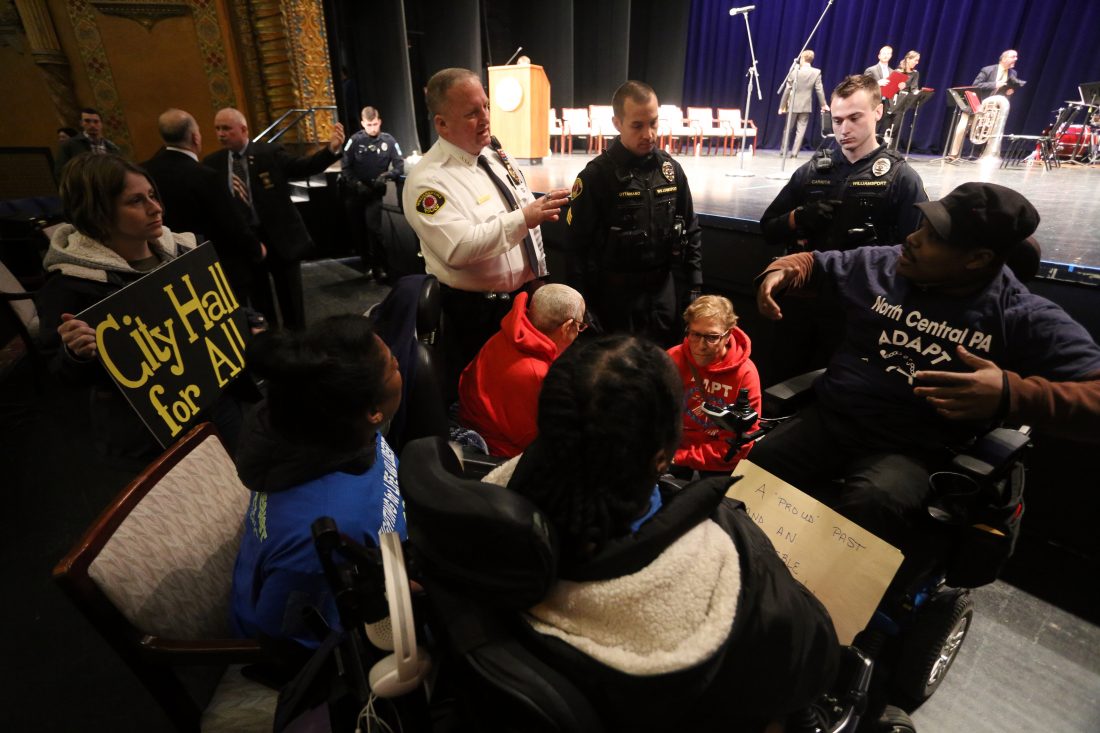 KAREN VIBERT-KENNEDY/Sun-Gazette Williamsport Police Chief Damon Hagen speaks with protesters from The Center for Independent Living at the Lycoming County Inaugural Ceremony at the Community Arts Center in Williamsport on Friday.

An otherwise formal and solemn occasion involving the inauguration of newly elected officials for public office was interrupted Friday morning by a protest staged by some dozen people calling for equal access to government facilities.

Chants of “What do we want? … Access. When do we want it? … Now” began just as Ken Sawyer, who served as master of ceremonies, began the second half of the program involving the swearing in of city officials at the Community Arts Center, Williamsport.

The protesters included a number of people in wheelchairs who formed near the front of the stage, continuing to chant throughout the end of the ceremonies.

At one point, Sawyer said into the microphone, “I would hope you would be quiet for the prayer, please.”

Karen Koch, advocacy coordinator, North Central Chapter of ADAPT, a grassroots group fighting on behalf of disability rights, said government buildings are required to be equally accessible to everyone.

She referenced Title II of the Americans With Disabilities Act.

Despite the law, city officials have not made necessary and adequate changes to the Williamsport City Hall building to accommodate everyone, she said.

City police, the county sheriff and sheriff deputies were on the scene. No physical confrontations were reported, although some protesters were seen arguing with law enforcement personnel.

Misty Dion, CEO of the Center for Independent Living Roads to Freedom, was handcuffed by police, but later released.

The two main individuals who led the protest would have been charged with disorderly conduct and defiant trespass, but the charges were dropped by Lycoming County District Attorney Ryan Gardner, said city Police Chief Damon Hagan.

Hagan said he had to reserve further comment regarding the city-based Center for Independent Living Roads to Freedom because the organization is currently in litigation with the city of Williamsport and has filed a complaint with the U.S. Attorney’s office in the Middle District of Pennsylvania, which has begun an investigation into accessibility of City Hall, along with other city-owned buildings and facilities, Hagan said.

“People have to be aware that the city has been in non-compliance,” Lycoming County Commissioner Rick Mirabito said. “At a certain level, we have to recognize certain facts.”

He noted that City Hall has been in non-compliance with ADA regulations for 30 years.

Mirabito said everyone has the right to redress grievances with public officials.

“Their rights are being violated,” he said.

Commissioner Tony Mussare took a dim view of the protest.

“I think this is very disrespectful to all the elected officials,” he said.

“They need to be listened to,” he said. “I understand their problem. My mother was in a wheelchair.”

However, Metzger also said there is a time and place for protest and he only wished some of the chanting had not occurred during a prayer and the formal retirement of colors by the U.S. Marine Corps League Color Guard.

Koch acknowledged that while many people may have been upset by the protesters’ action, “extreme advocacy” is sometimes required to draw attention to a problem.

Mirabito called for the public to come together and solve the issue.

“Everything is not perfect in our community,” he said.