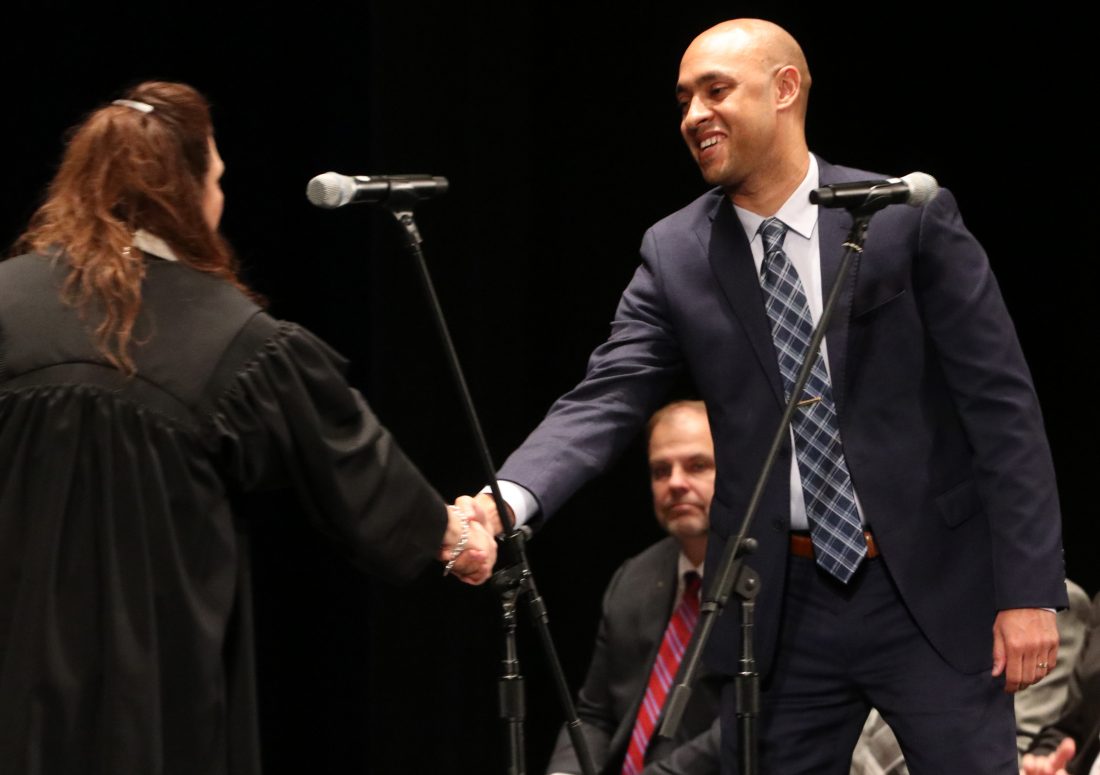 KAREN VIBERT-KENNEDY/Sun-Gazette Judge Joy Reynolds McCoy, left, congratulates Derek Slaughter, right, after he is sworn in as the mayor of Williamsport at Friday's Inaugural Ceremony at the Community Arts Center in Williamsport.

The city’s first black mayor took the oath of office Friday at the Community Arts Center.

Derek Slaughter was called up from his seat by Lycoming County Judge Joy McCoy to center stage. He held up his right hand as McCoy administered the oath and asked Slaughter to repeat it.

Following the action, the theater erupted in applause and a few shouts of “way to go” could be heard from supporters.

Slaughter later expressed how he felt during the moment on stage, describing it as “exciting” and “humbling.”

He will repeat the process at 9 a.m. Monday when the city holds a ceremony for city officials at City Hall.

After the ceremony, along the aisle and in the theater lobby, Slaughter was approached by scores of people offering their congratulations.

Also taking oaths were city Councilmen Adam Yoder, Jon Mackey and Vincent Pulizzi. Councilwoman Bonnie Katz was reelected to a third term and was not present for the ceremony.

Mackey, a Democrat, said he was thrilled to be at the event and touched on how he worked hard to get to be a councilman.

Yoder, a Republican, reflected, too, on the hard work it took to run a campaign, earning the trust of the electorate.

Pulizzi, also a Republican, said he believed he and the other councilmen and incumbents on council could be a group that helped to “brighten” the city, keeping it a safer place to work and live.

Janice Frank, city clerk, and deputy controller Paulette Noviello, who are appointed, also were sworn in.