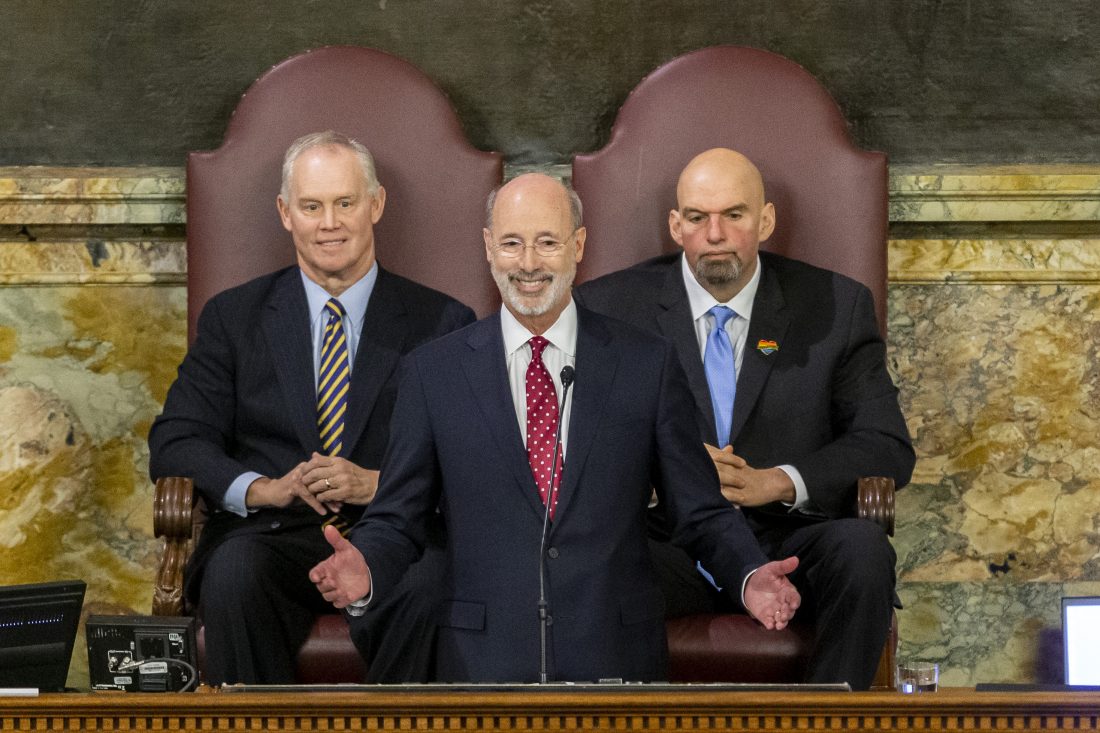 Calling on the Legislature to envision a “Commonwealth where anyone can come and anyone can build a better life,” Gov. Tom Wolf put forth a proposed agenda Tuesday during his yearly budget address which he believes would set in motion that vision starting with the education system.

Noting that, over the first five years of his term as governor, more than $1 billion in cuts to the public school system have been restored. Still, Wolf urged the Legislature to do more.

Charter school reform was another subject tackled in Wolf’s address.

Acknowledging that charter schools play a role in the state’s education system by offering parents choices and “providing a source of competition and innovation that can benefit all students, no matter what school they attend,” Wolf asserted that “too many charter schools here in the Commonwealth have strayed from that purpose,” adding that “some are little more than fronts for private management companies.”

“Our charter school system is in desperate need of reform,” Wolf said. “It’s time to close the loopholes. It’s time to establish real standards and it’s time to level the playing field.”

Wolf estimated that $280 million a year could be saved, which would in turn benefit the public school system.

Focusing on the financial burden of higher education, Wolf said, “I believe in the potential of our people, and if you ever find yourself doubting that potential, just talk with students at one of our colleges and universities.”

Wolf cited the struggles with the cost of education of a student at Mansfield University in introducing a proposed $60 million investment to increase state tuition grants, which he estimated would serve more than 130,000 students.

“But, we cannot stop there,” Wolf said, as he introduced a proposal to add $200 million in scholarships for students opting to attend state system universities.

Approximately 25,000 students attending PASSHE schools would be affected by this change.

In order to pay for these proposals, Wolf said that existing tax dollars that are now marked for the Horse Racing Development Fund would be repurposed to cover the costs.

“Let’s bet on our kids instead of bankrolling race horse owners,” Wolf said, adding that this would ensure the viability of the state’s higher education system.

Wolf noted that the new scholarship program was inspired by Nellie Bly, a state native who had to drop out of college after her father died, but then went on to become a pioneering journalist.

“That’s why the Nellie Bly Scholarship will pay for what other financial aid does not cover so that they can spend more time contributing to our Commonwealth and less time paying off their debts,” Wolf said.

Wolf called for updating salaries of teachers in the classrooms, something which he said hasn’t been done since the 1980s, and he also pointed out the poor condition of some of the classrooms in which they teach.

Wolf proposed a $1 billion investment to fix school buildings afflicted by lead paint and other detriments and to streamline the process to allow school districts to apply for this funding.

“Let’s make sure every parent who sends their kid off on the bus this September can spend less time worrying about mold, lead and asbestos and more time looking forward to finding out what their kids have learned when they get home,” he said.

Social distancing has become the norm nationwide, with businesses shutting down or curtailing operations and people ...

The state Department of Health confirmed on Saturday that Sullivan County has its first positive case of ...

HARRISBURG, (AP) — The Pennsylvania Department of Health says the number of people who have tested positive for ...

In separating people, the coronavirus pandemic did more than keep friends from socializing. In many cases, it has ...

Four regional organizations are teaming up to launch the COVID-19 United Community Funds to ensure that the ...