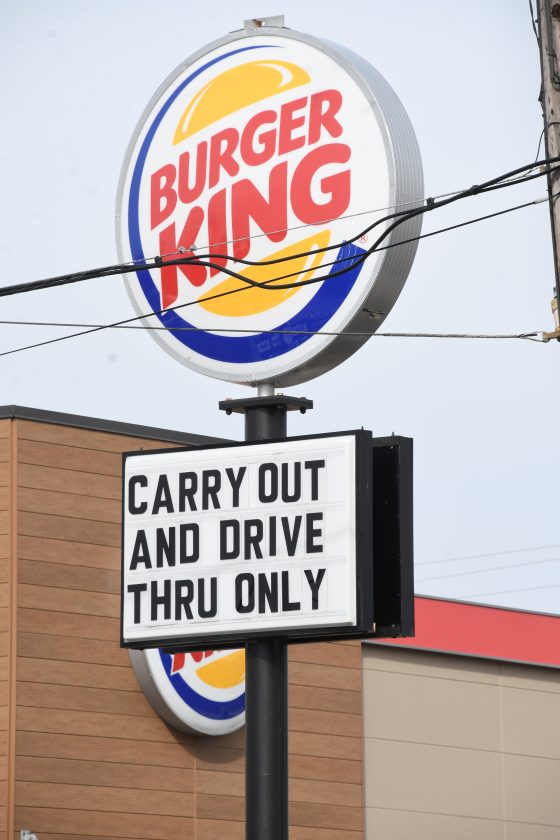 MARK NANCE/Sun-Gazette Many restaurants that remain open have closed their dinning rooms such as this Burger King on Washington Blvd.

State and local police in Lycoming County started enforcing Gov. Tom Wolf’s order to shut down non-life-sustaining business at 8 a.m. Monday morning but many said the area’s stores had already shut down.

Law enforcement officials said that while they have the ability to cite businesses, officers plan to work with them to understand the dangers COVID-19 can pose to normal operations.

“As of this time in Lycoming County, The Pennsylvania State Police has had only two complaints of businesses allegedly out of compliance,” said Trooper Angela L. Bieber, community services officer at Montoursville. “Those were promptly investigated and found to actually be in compliance.

Other police forces in the area said they have encountered no problems enforcing the governor’s order.

“Currently, we are pleased with the response in our area and have had no issues,” said Officer Jordan Mahosky, of the Tiadaghton Valley Regional Police, in a statement. “COVID-19 is a very serious public health pandemic and we must take extraordinary precautions to help stop the spread in our area. Thank you for your understanding in these difficult times.”

If any issue does arise, Mahoskey said his department will also work to educate businesses – something of a running theme throughout the area, as Old Lycoming Police Chief Joseph Hope, said his department is looking to do the same rather than cite people.

“They’re looking for compliance more than penalty, especially in a small community like this,” he said. “We’re going to try to make contact, and try to educate them.”

Montoursville Borough had taken an extra step with Mayor Steve Bagwell asking Chief Jeff Gyurina to refer non-compliance to him so he could speak with the business.

Rather than people calling the police station to report people for continuing to run their business, Gyurina said he took several calls from people making sure their plans would respect the governor’s order.

“In most of the small towns and most of the big, people are being very compliant,” said Gyurina. “We can (cite businesses), but we’re going to make every effort not to.”

In a letter sent by the state to all law enforcement, each person who violates the order could be sentenced to pay $25 to $300 or up to 30 days in prison, under the Disease Control and Prevention Law of 1955.

“I, of course, defer to you as law enforcement executives and district attorneys to determine appropriate charges for suspected violations,” said the letter. “We also expect that any discipline for violation of the orders will be progressive such that enforcement will begin with a warning to any suspected violator.”

However, police should focus their attention on stopping people from congregating, the letter said.

HARRISBURG — The following rules are in place regarding Gov. Tom Wolf’s stay-at-home order which he extended to ...

Williamsport is getting more than $600,000 in unexpected federal funds to be used toward the pandemic ...

Sheetz helps children in need Sheetz locations across the state, starting today, will include a free turkey ...

When Gov. Tom Wolf issued his declaration ordering non-essential businesses to close in an effort to slow the ...

Lycoming College will hold commencement on Oct. 4 for students to have the opportunity to walk across the stage and ...

In attempting to quickly solve issues created by the COVID-19 outbreak, the administration at Montoursville Area ...