Local districts among winners of regional Odyssey of the Mind challenge 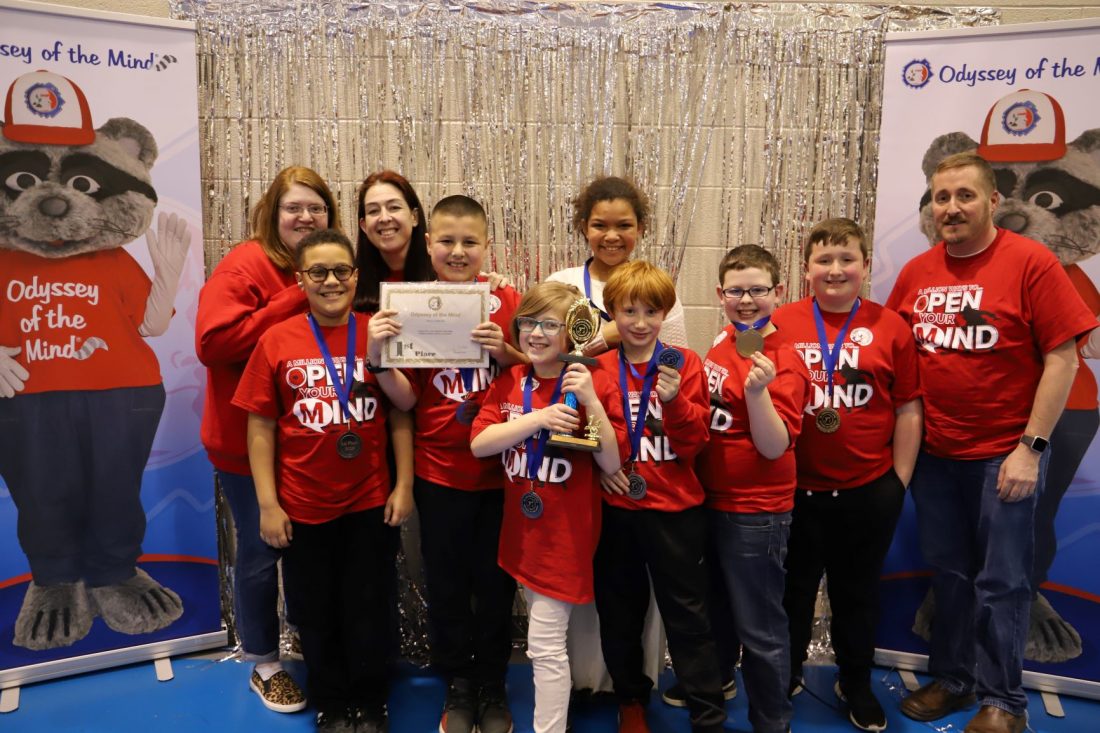 The 28 teams qualified to advance to the statewide competition that will be held April 4 at Lock Haven University.

Teams that qualify at the state tournament will advance to World Finals on May 27 to 30 at Iowa State University.

The teams are typically organized by school, and students are divided based on age: primary, kindergarten through second grade; Division 1, elementary school; Division 2, middle school; and Division 3, high school. Teams have been working for months to prepare for this tournament which is based on innovation, creativity, and teamwork.

Odyssey of the Mind is an international competition that involves teams of up to seven students working on one of five “long-term” problems.

Adults are not able to help the students.

Teams have one or two adults who coach the students and help facilitate meetings but can’t directly influence the students’ work.

The teams present their solution to a panel of judges which will score the teams based on the parameters of the problem.

“Students have the power to apply their knowledge and make their problem solutions come to life in amazing ways.”

Teams are presented with five long-term problems from which to choose. Each team has only eight minutes to perform their solution and must stay within a very small budget so creative use, or reuse, of materials is essential.

Spring Moore, Williamsport School District OM Coordinator, said, “Rarely do kids get to “own” the entire finished product, without adult assistance, but in Odyssey of the Mind, from kindergarten through 12th grade, these kids have the experience of creating a solution in all aspects, from start to finish, totally on their own.

“They problem solve and encourage each other and make memories and friends that will last a lifetime.”

“Participating in Odyssey of the Mind helps students to be actively involved in something that allows them to use problem-solving skills in a very creative way while having fun at the same time.” said Stephanie Trimble, Muncy OM co-coordinator. “Through the process they learn to compromise, work together as a team, and think on their own (without adult input). Kids grow and learn so much through their Odyssey experience.”

This years’ five problems included designing, building, and running a vehicle that can that overcome obstacles and save the world from a pending disaster; Designing and building a team-made network that can transmit an image, a text message, and an email while pop-up ads appear and malware infects the network; Creating and presenting an original performance about one of the world’s greatest detectives and do intellectual battle with a supervillain who wants the detective to fail; Designing, building, and testing a structure made of only balsa wood and glue that have adjustable interconnected parts and must be able to pass under a limbo bar; creating and presenting a humorous performance about a character that presents gibberish ideas that are believed to be genius but are nothing more than gibberish. Primary teams had to create and present a humorous performance that includes a fashion show for insects.

In addition to the long-term challenges, teams are given an additional problem during the spontaneous portion of the competition. Teams enter a room without their coaches, are given a problem by the judges and have between four and eight minutes to solve it with whatever they are given.

“OM has taught me that there is always a new and different way to solve a problem. It has allowed me to broaden my horizons and see the world in a new way. It made me get out of my comfort zone. I have also made some lifelong friends along the way.” said Paige Diabelko, Williamsport High School senior.

All teams placing first and second in all divisions advance to the state tournament. Two third place teams will also advance as wildcards. Primary teams do not participate beyond the regional level.

Teams advancing to the State Tournament are as follows:

Full results are available at ncpaodyssey.org. The north central region includes Tioga, Lycoming, Union, Snyder, Sullivan, Columbia, Montour, and Northumberland counties. Information about the northcentral region and Pennsylvania Odyssey of the Mind can be found atwww.paodyssey.com/.