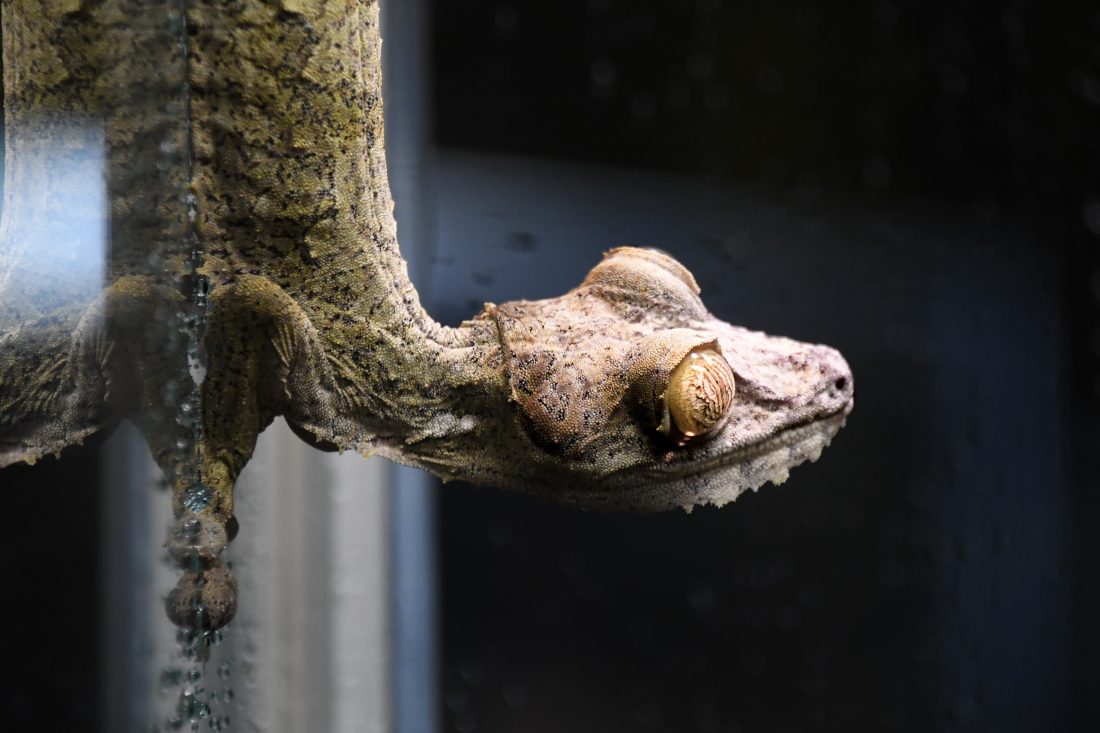 MARK NANCE/Sun-Gazette In complience with Governor Tom Wolf COVID-19 directive, Reptiland is close. However, staff at the zoological park must still care for and feed its animals such as this Giant leaf gecko.

ALLENWOOD — In the eerie silence of the reptile house of Clyde Peeling’s Reptiland, zookeeper Kathryn Allen filled a pitcher with warm water. Inside that pitcher was a collection of frozen mice, which needed to thaw to be future meals for the slithering residents of the 56-year-old zoo.

The running water from a sink located behind a locked door echoed off the walls of the empty room, broken up every few seconds only by the jingling of Peeling’s keys. It’s odd, said Allen, to not hear the din of visitors browsing the Union County landmark.

As a non-life-sustaining business, Reptiland has been closed to visitors since Gov. Tom Wolf’s edict on March 17. And, even though there are no patrons to visit the more than 800 animals, a staff of five zookeepers are still making sure the enclosures are cleaned and the animals are fed on a daily basis.

On this particular day, Allen is preparing mice for the various snakes scheduled to eat. The mice are shipped to Reptiland in frozen blocks and they have to be thawed before they can be given to the animals. It’s important the animals are fed dead mice so they can’t potentially hurt the snakes they’re meant to feed.

It’s work Allen does often. But never in her 4 1/2 years working at Reptiland has she done so under such quiet conditions. Usually, preparations for animal feedings are done as she readies to give a lecture to the newest set of visitors. Now, there’s plenty of time to finish the work she and the other zookeepers need to complete on a daily basis.

“It’s so weird,” Allen said of the quiet workspace. “There’s no sounds or music and the exhibits aren’t running. It’s eerie. You’re used to having all this interaction with people and now there’s none.”

This is a situation unlike anything Peeling has seen since he brought the zoological park to Allenwood in 1964. He remembers having a down year for revenue as the fallout from the Three Mile Island accident and a spike in gas prices in 1979. But even during that rough summer, the park was still bringing in revenue.

Now, he’s left to pay all the bills he normally has with absolutely zero revenue. It’s forced Peeling to scale back on staff, taking an employee base which could be as many as 20 people in the winter and 30 in the summer to fewer than 10. Five of those are zookeepers who are spending all of their time working the husbandry side of the business, making sure all the animals are fed and the enclosures are cleaned.

“We have no idea how long this thing is going to last,” Peeling said. “I’m a great believer in science and I believe the scientists, and it sure sounds to me like this could go on for months. I hope I’m wrong. I would love to be wrong. But I can assure you, the longer it goes, the more stressful it’s going to get.”

At 77 years old, Peeling still has spring in his step. He walks around the grounds of Reptiland with pace and purpose. When a FedEx delivery of feed crickets arrived at the facility earlier this week with a knock at the door, he bounded out of his chair to greet the delivery driver. As the only one in the office this particular afternoon, he raced up the stairs to answer a ringing telephone a little while later.

But the daily rigors of the animal husbandry are a little too much for him anymore. Standing for hours on end, constantly bending at the waist and lifting item after item isn’t suited to him after 56 years. Instead, he’s an office worker now, especially with his secretary laid off while the zoo is closed. Much of the operation of the zoo is run by his son, Elliot, who is integral to the animals being tended to.

“We would not survive without him,” Peeling said.

Peeling ventured back to the animal houses only twice during the early portion of the week. Both times came as he entertained members of the media. Largely he’s in the office making sure the bills get paid. He’s making sure what needs to be ordered is ordered. He’s working with his vendors to come to an understanding of when payments can be made during the COVID-19 crisis. He’s working with Woodlands Bank, which has been very understanding of his predicament and is making sure Reptiland can stay afloat.

He’s had to tighten his belt since the shutdown began. His skeleton crew includes Elliot, as well as the zookeepers, a landscaper, and a handyman who makes repairs where necessary. Keepers are working just four-day weeks, but the rotation is such that there’s always two or three keepers a day tending to the animals.

With the weather getting warmer, it’s allowed him to trim back on some of the zoo’s energy consumption. They can cut back on the heat in the alligator house because they can easily withstand the current temperatures.

But in other areas, there’s no cutting back. Those animals in the reptile house come from tropical locations and must be kept warm. Animals are also on a strict feeding schedule and the smallest of animals with high metabolisms must be fed consistently or they could end up losing weight quickly.

In the cases of some small animals, keepers must use placental forceps to hold a feeding cricket directly in front of the animal they’re trying to feed in order to be assured it’s eating its required amount. The feedings are so meticulously accounted for because a change in eating habits often can be the first sign of health issues for the animals.

Allen said getting everything done over the course of an eight-hour day is about routine. Every animal is checked every day. It’s the same amount of work keepers have always had to do, only now they don’t have to pause during the course of the day to give educational lectures to visitors. For Allen, that means a little extra time to spend with the giant tortoises Al and Henry, or with her favorite animal, the female Komodo dragon, Bonita, who is described as being both “very smart and, at times, a bit sassy.”

“It’s about working together and working to each other’s strengths,” Allen said. “There’s a lot of communication going on. And if something gets crazy, we can call on someone else to help out.”

“I’m eternally grateful for the work of the keepers,” Peeling said. “I couldn’t keep it together without them.”

Peeling’s biggest fear is one of his keepers potentially contracting COVID-19. While he promotes social distancing as they do their work in and around the zoo, it’s unavoidable that they’re often in the same workspace. He currently has one keeper stuck in Bozeman, Montana, with a traveling exhibit at the Museum of the Rockies. Ideally, Peeling would like to bring the keeper home, but he worries about the potential of catching the disease in the course of travel and being exposed to various people. So instead, his keeper is going day by day in Montana, tending to the animals which are part of the traveling exhibit, even while the Museum of the Rockies is closed.

He’s never had the zoo closed for outside reasons for more than a day at a time since opening in 1964. Each of those times was for a major storm, but Peeling estimates it’s happened fewer than 10 times.

What he and his business are dealing with now is unprecedented. Peeling had a frank discussion with Elliott recently about how long they can sustain the park without patrons. As a man of science, he understands and hopes the virus is eventually going to run its course through society and life will return to some semblance of normalcy. But that sense of normalcy could be quelled based on the economic impact dealing with the virus has.

Peeling isn’t sure whether he could hold out for a year or not before having visitors return to the zoo. If he were able to do so, he would have to go deeper into debt. But even when restrictions on business are lifted and people can begin to congregate in groups again, there are going to be so many entertainment opportunities fighting over consumer dollars.

So for now, Peeling holds his breath as he waits to see how it all will play out. He continues to come to work every day doing what he can to help the business make it to the next day.

“If you’re responsible for other lives, non-human lives, you have a responsibility,” he said. “You can’t just say we’re going out of business. It’s not an option. You have to keep taking care of the animals and plugging ahead.

“It’s the only attitude you can have.”