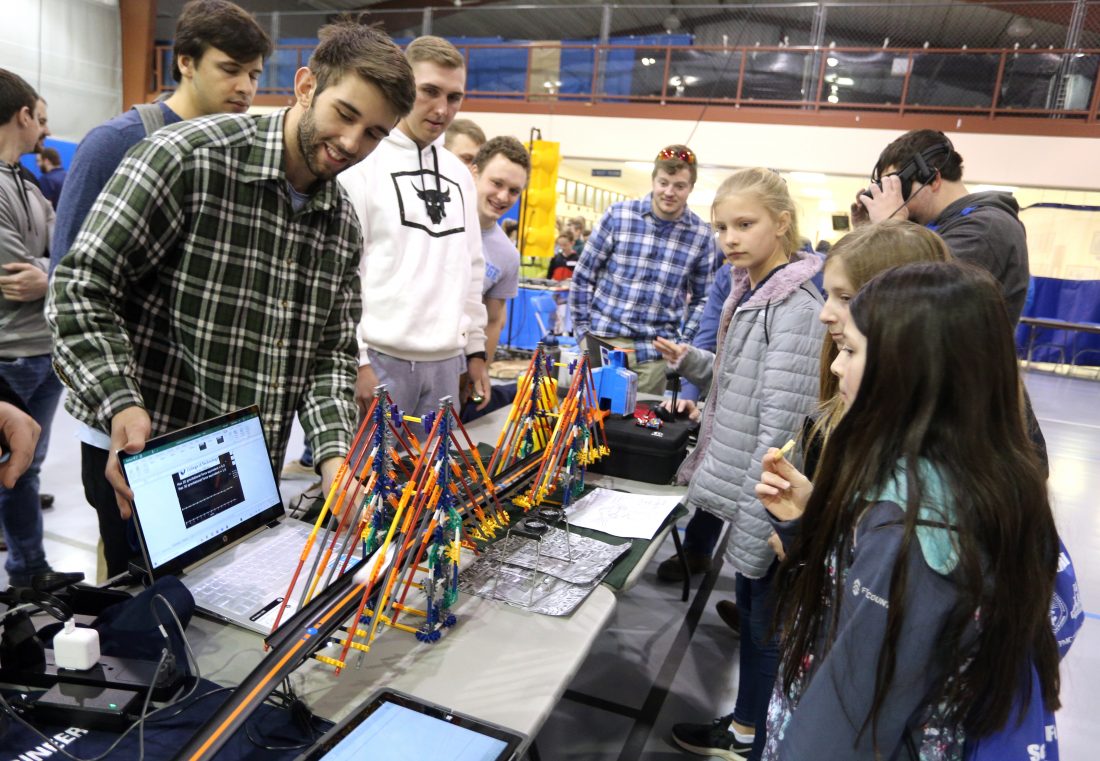 Students from area school districts learned about everything from the science behind solar energy to how bees produce honey as part of the annual science festival sponsored by The Pennsylvania College of Technology, Lycoming College and the Williamsport/Lycoming Chamber of Commerce.

Over 1,500 fifth-graders from schools in Lycoming and Sullivan counties, as well the Warrior Run Area School District, wandered through the Penn College’s Field House exploring displays and witnessing demonstrations aimed at encouraging students to learn more about the fields of science, technology, engineering and math.

In the Klump Auditorium, they were treated to a demonstration by the college’s Culinary School, called “A Taste of Technology,” about how science relates to food and in the school’s gym, the Franklin Institute introduced students to today’s electricity.

Almost 40 vendors, including organizations and clubs from Lycoming and Penn colleges as well the county conservation district, a local hospital and various businesses and industries, gave students the chance to explore possible career paths.

“What we find is that students, once they start reaching the high elementary and middle school, they start losing interest in STEM. This is just to reinvigorate and bring awareness to and the excitement behind science, technology, engineering and mathematics,” Tanya Berfield, director of college transitions and first year initiatives, said.

By invitation only, Berfield said that the feedback from the districts has always been positive.

“Everyone has always attended, there is always positive feedback about what a great day it is for their students,” Berfield said.

With the use of miniature cars and a bridge made from construction toys, students in the civil engineering program at the college were able to show the middle schoolers how vibrations from vehicles might damage a real bridge being constructed.

“We use the vibrations to determine how much it’s going to damage the bridge in future years,” senior civil engineering student Adam Yannuzzi said.

“We can use that to design future bridges to go up and we’re going to choose the lifespan of a bridge rather than put a bridge up and hope it stays up. Our major is the science behind maintaining and keeping infrastructure working and designing and building infrastructure,” he added.

Also at their table, the young students had the opportunity to experience virtual reality. The civil engineering students had loaded a map of the college taken from a drone on a computer screen.

“With the drone footage, it puts together a 3-D image so you can teleport yourself down onto the streets and you can walk through the campus,” Alyssa Prebich, a junior in the civil engineering program said.

Vinnie DeBrody, a fifth grade student at McCall Middle School, had just finished operating on a large plastic man patterned after the childhood game Operation. The hands-on activity was part of the demonstration by representatives of UPMC.

DeBrody admitted that he liked science, but was more interested in being a teacher when he grows up.

Carey Entz-Rine, from the Lycoming County Conservation District, walked through the crowd dressed as a tick, to draw attention to vector-borne diseases, such as Lyme disease. At the Camp Susque table, students could learn about bees and honey production.

Wyatt Emrick, a student in the Loyalsock Township School District, took a moment from his trip around the Field House to expound on what he had learned about bees from the demonstration.

“Bees will keep making honey for as long as they can and they won’t stop until they can’t make any more,” Emrick said, adding he is interested in science and would like to have a job dealing with the production of electricity.