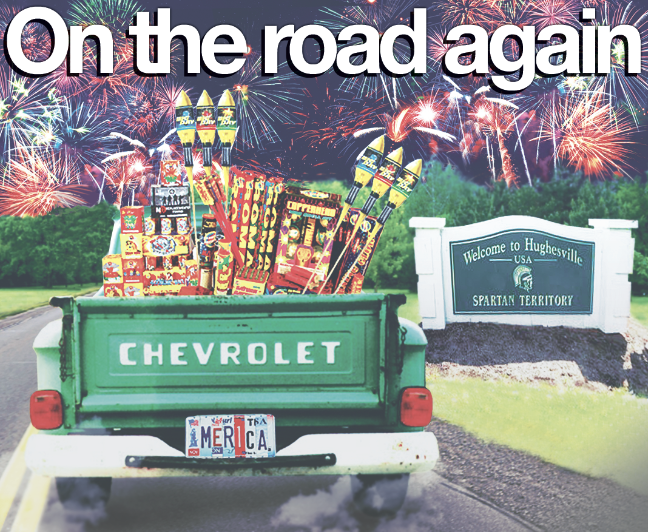 There will be fireworks on July 4, and people can view them inside or outside their vehicles at the Lycoming County Fairgrounds in Hughesville.

The site will hosting a park-and-watch-only fireworks show at 9:40 p.m., with the gate open by 7 p.m., according to Van Michael, general manager, president and CEO of Backyard Broadcasting Inc., the event organizer.

“We want to welcome everyone to the fairgrounds for the show,” said Rocky Reed, fair association president.

The show will accompany patriotic tunes on the various radio stations owned by the media company, Michael said.

There will be “social distancing” requirements at the event, to follow guidelines by Gov. Tom Wolf during the green phase of reopening the state economy, the station manager said.

Station management decided on relocating the fireworks from an empty lot west of Maynard Street owned by the Williamsport-Lycoming Chamber of Commerce due to environmental and wildlife considerations.

A nearby eagles’ nest may have chicks unable to fly, which could be disturbed by the 20-minute noise of the fireworks show.

Michael said he checked with the state Game Commission on rules and the lot fell within the 1,000 foot boundary to not disturb the eaglets or eagles. Presence and behavior must not have a detrimental effect on the eagles or their future use of the area.

“We also want to protect the eagles,” Reed said.

Mayor Derek Slaughter said he also was waiting to hear from the U.S. Fish and Wildlife Service, which has a requirement of a half-a-mile distance from the birds’ nest. The National Eagle Repository is accepting questions via email due to the coronavirus.

Slaughter also issued an order not to permit any public gatherings of 250 people or more in the month of July, so the large crowd was out, he said.

Questions were asked of the Sun-Gazette and on social media why the event could not take place downtown and off the Market Street bridge.

Neither the city or Backyard Broadcasting applied for a permit to shut down Market Street bridge this year with the state Department of Transportation to hold a fireworks show at the usual spot at the dike and off the bridge, said Maggie Baker, a spokeswoman with PennDOT’s district office.

No city taxpayer dollars are going into the fireworks show, Michael said.

Financing is by the radio station and community sponsors.

Hughesville Volunteer Fire Department and the fair association are assisting along with borough police, he said.

“In my opinion, no one is to blame, except a virus and state guidelines that set this progression of events and decisions into motion,” Michael said.

The fairgrounds parking lot locations are off Route 405 and off Fifth Street from Route 118, Reed said.