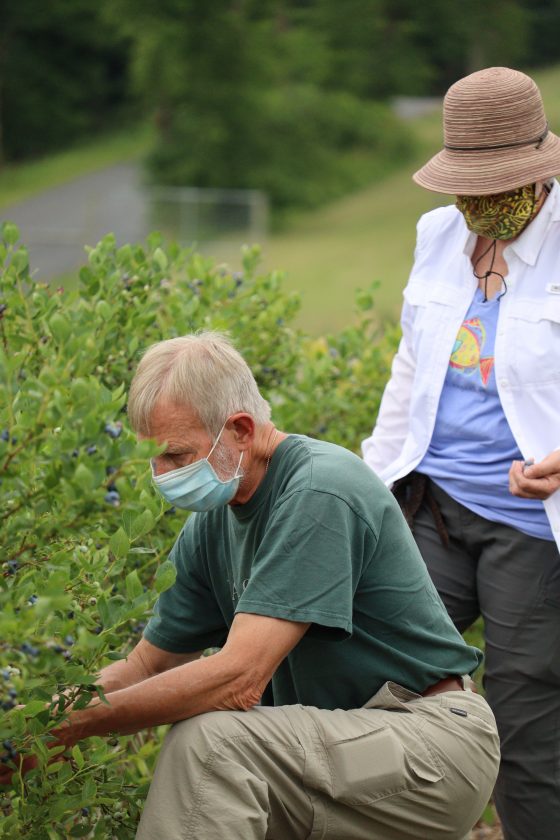 LINDEN — A wave of blueberry pickers arrived with the season’s start Wednesday at Shirey’s Blueberry Hill, with many not only seeking the freshly-ripened berries but also a family outing, said owners.

The patch, close to Route 220 along Northway Road, may see 500 people in a day, said John Shirey, who is in his fourth year of operation.

“For an opening day, this has been fantastic,” he said of the blueberry rows filled with people and an overflowing parking lot.

“The sweat, labor and tears that go into all the rest of the year aren’t anything compared to it — this is the best,” he said.

The blueberry bushes, which were planted in 2014 but left to germinate for two years before the pickers came, are now eight years old and producing the best berries they have yet, said Shirey.

To start, only the first 10 rows were available for picking as the other varieties ripen.

“They vary from texture and taste,” he said. “Everybody’s taste is different. Everybody asks me which one’s the sweetest, it’s all a matter of taste.”

“I’m having a hard time, myself, deciding which one I like the best,” he added.

At the far end of the fields were Andrea Davies, of Montoursville, and Diana VanDeLinde, of Williamsport, who had parked their baby strollers and were hard at work sifting through the bushes with their other family members.

“We’ve been picking here for three or four summers now,” said Davies. “It just keeps getting better, and the people who run it are so nice.”

The family keeps up with Shirey’s Blueberry Hill throughout the year and plans their visiting several weeks in advance, said VanDeLinde.

“We’re making blueberry stuff for the holiday weekend,” she said.

They plan to come back as the other varieties ripen, said VanDeLinde.

“We’ll be back, three, maybe four more times before they close,” she said.

For Shirey, he said it’s those kinds of experiences with family that makes his work worth it.

“It’s not just about the berries, it’s about interacting with the people,” he said.

They come from all over, said Shirey, with many routine visitors from Williamsport and as far as from Renovo.

“They’re certainly here because they love blueberries but they come also because it’s a great family experience, the people appreciate how well kept the fields are and how nice it is,” he said. “That’s been the most satisfying part of this whole thing.